Today I have another quick entry for both Swordmaster’s Monster March and Ann’s “Neglected But Not Forgotten” painting challenges – it’s “Shimmergloom, Shadow Dragon” which appears to be a named individual dragon from the Drizzt series of fantasy novels. To my eye, Shimmergloom seems very small for a dragon, but perhaps this is its younger form. I don’t know.

What I do know is that the model’s base came badly warped, and severla attempts to reset it via hot water over the years have been unsuccessful in the long term, as every time, the PVC just re-warps after seemingly resetting to a nice flat outcome. This was a pretty consistent problem for the models in the first few of those D&D Adventure Boardgames, and in some cases, I’ve cut them off their bases and glued them down to new ones, the fact that Shimmergloom itself has warped legs and the relatively small contact points prevented me from doing so. This is also the reason I’ve not sculpted on simple flagstones to the base, as I tend to do with the larger models, and have instead just painted them on as I do with the smaller ones. 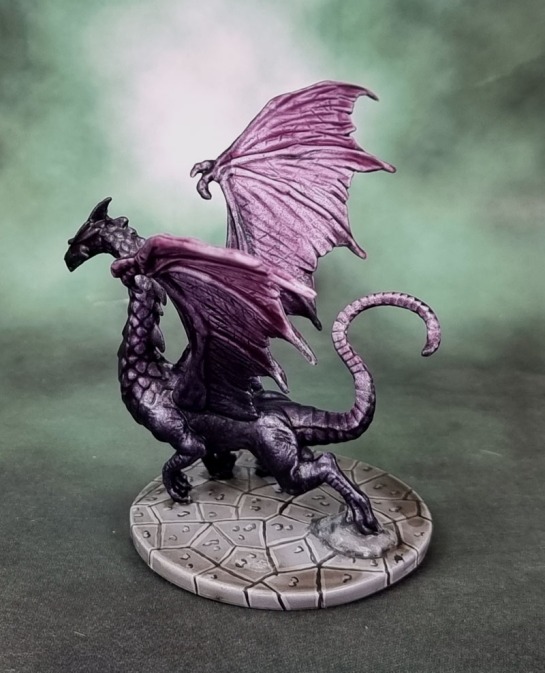 The reason Shimmergloom even got painted was through me needing something to hand to demonstrate to Marouda how I blend different shades of contrast paint via the use of the medium. That pretty much did most fo the model, though I did go back and add a thinned coat of metallic medium to the entire model, and then go over it again with another run of the two contrast paints. I get it that “Shadow Dragon” in D&D terms probably means a very specific shade of black or whatever, and that they seem to be very strict in what kinds of horns this dragon or that has, and so my purples are probably accurate to some other sub-form of dragon, but if you’ve been following this blog for any amount of time, you’ll also know that I don’t really care that much about such things as long as my board game models look decent on the tabletop. 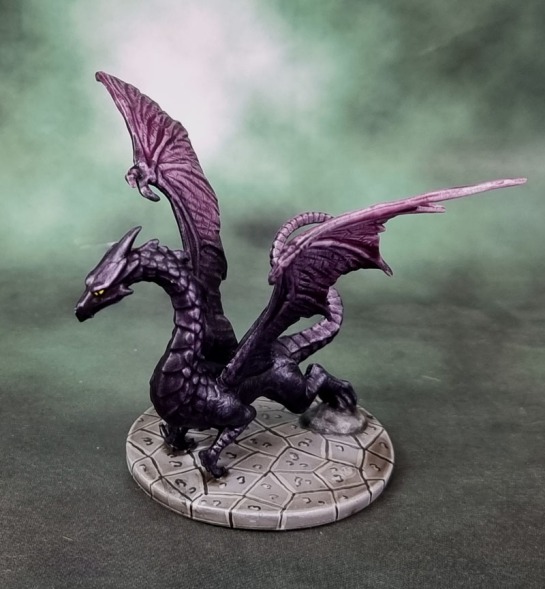 There is a nice, subtle shimmer/irridescence in hand that gives me a little bit of a feel of translucence in a completely opaque model. Sadly, it doesn’t really come across in photos, but it’s a nice effect that makes me glad I did this model, as I learned something useful for the future. So once again I have to thank both challenges for making me finish this model, rarhter than just have it sit around primed for 8 months, or using it to demo a technique and then forgetting about it on the table for a year afterwards. Now it’s ready for some gaming! 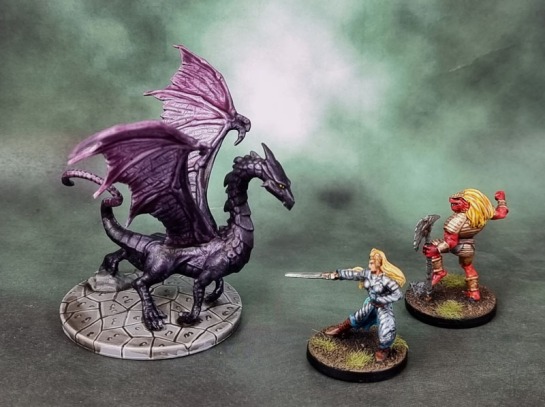 Not so big for a fantasy dragon, though it’d be plenty big enough if it were real!

…once we clean up the tabletop space in the shed, anyway!