I picked up my first D&D Adventure Boardgames quite a few years ago – when I was first getting into nerd-boardgames again and seeing them as a source of miniatures. Because more is always better, right? 😡 So my group at the time played through Ravenloft, and then we got about halfway, or 2/3 of the way through Ashardalon, but then it fizzled out as we played other games, and even though I painted my way slowly through those miniatures at the time, and then revisited them over more recent years, it wasn’t until last year’s lockdowns that Marouda and I revisited them properly, and in doing so, I picked up the games I was missing – Tomb of Annihilation and Dungeon of the Mad Mage. After opening both games, I basically did that thing where you separatre the models that you think will paint up most quickly and easily… and then put them into tub and forget about them for 6 months or more.

Satin varnish made them a bit too reflective in the photos.

That’s where the three little misshapen lumps of plastic we see today came from. I took a peek into the tub a couple of days ago, after posting up the F̶r̶o̶g̶l̶o̶k̶s̶ Grung models, and pulled them out.

The lumpy little sculpts in green looked more like Nurglings to me than anything else, and the name “Zorbo” made me think of Zorba the Greek rather than anything D&D related, and so I did need to look up what the actual fuck these things are supposed to be. And found this illustration alongside this text: “Zorbos were typically around three feet tall, and covered in gray fur. They had sharp teeth, as well as sharp claws on both hands and feet.” 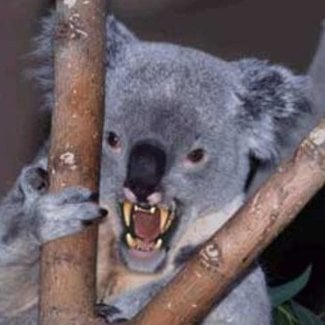 Anyway, after a little more reading it became plainly obvious that Zorbos are simply silly-named fantasy versions of the very real and very vicious Australian Marsupial, the Drop Bear. Just with “the flesh of elves” and some silly shit about “taking on the aspect of their surroundings to make themselves tougher” added to their existing reputation for viciousness and chlamydia. As an aside, one positive of the recent travel restrictions is drop bear attacks and fatalities are WAY down at the moment. 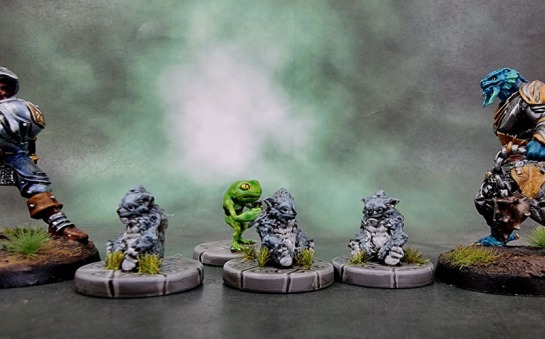 Here, even a Froglok stands over the lazy little drop bear bastards who can’t be arsed even to stand up.

They’re not good sculpts, nor do they photograph well, but they’re bloody small and simple enough that did at least make it easy for me to paint them, and so the actual painting went pretty straightforwardly, and now I have another three down for Ann’s “Neglected But Not Forgotten” painting challenge and three more little mini-monsters for the D&D boardgaming ready to go!