Back to Flames of War/15mm WWII for a moment, and I’ve also managed to finish off the first of the three Grenadier Zug (Platoons) that I started back in the day. As with the 88s I showed off recently, these didn’t have much left to go on them, so I’m only counting them as one “figure” each, despite the 35 individual figures across the eight bases. (Don’t worry, I’ll be counting each and every one of the next ones that have most of their work to do!) 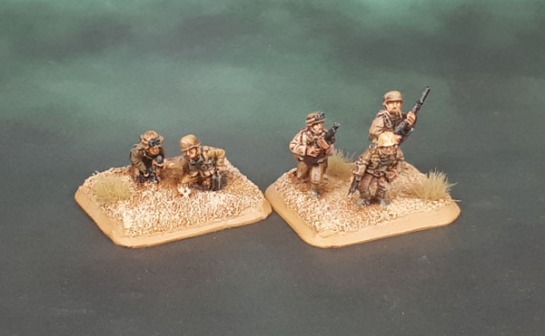 Now, it’s been fucking forever since I’ve played FoW, so I may get the odd name wrong – but these two stands represent the platoon command as well as the light mortar attached as fire support.

Next up, we have the six stands that represent the 3 squads or 6 sections that makes up the bulk of the platoon. For my particular DAK force, I wanted it to represent a “campaign” force, so the uniforms are a mixture of tones – representing new uniforms, old sunbleached and worn uniforms, bits of uniform purloined from the attached Luftwaffe – not to mention captured apparel from the Commonwealth troops that the DAK spent their time engaged with. One thing I do remember about when I was building and conceiving of this army was one report that described the amount of captured and rag-tag gear the DAK were wearing in terms of it “looking like two Commonwealth Armies chasing back and forth across the north of Africa.”

That mental image stuck with me and I wanted to reflect it with my army looking very much like that – so the models are a mix of the early types available (all metal, at the time) to give each stand and unit a more diverse look with more sculpt variation. This gives it a more interesting look and makes it more of an interesting paint project, but at the cost of being a lot more painful to paint – as I found out.

Ah well, on we soldier…

edit – I’ve just noticed something else that I’d completely forgotten – and so it’s not evident in the pictures either. Three of the infantry stands are in “combat” poses, while the other three are in “deployment” poses – the three “combat” stands are supposed to be in front, while the others would be behind them. Such small details that even I’d forgotten them!