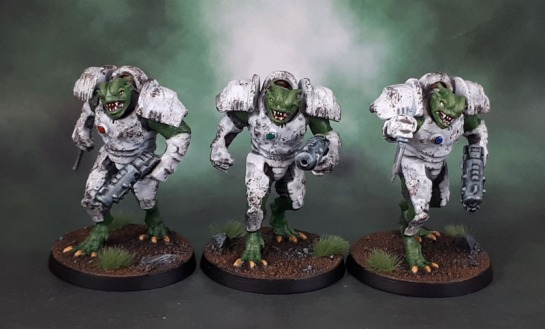 So here’s something a little more novel. My Contrast Paint experiment series has so far been emphasising how things have gone well, or taking something that was okay and tweaking it to be a little better, and so on. Today we have an example of when Contrast Paints combined with bad models to create …something not good. 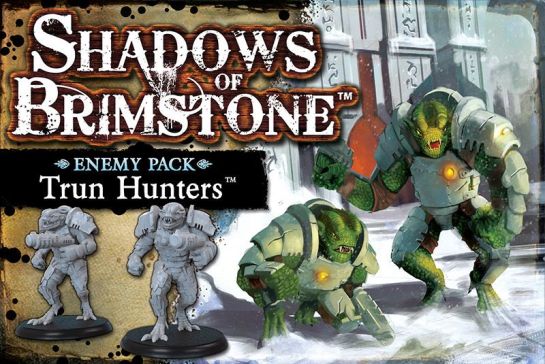 These models are another trip from the Shadows of Brimstone boardgame kickstarter’s extras. The first thing I did was customise them slightly, so they’d be slightly more individual and slightly less a trio of clones. As they’re only designed to be monopose, and don’t otherwise fit well my options for easy modding were limited -and especially so because they’re shit models that I was not willing to put too much work into modding. I I adjusted the arm poses and head tilts. I also gave one of them an old 1st/2nd Edition Space Marine Combat Knife and another one of them a forearm underclaw from a bit of 40k hedgecutter I had in a bits box. Then it was time to paint. 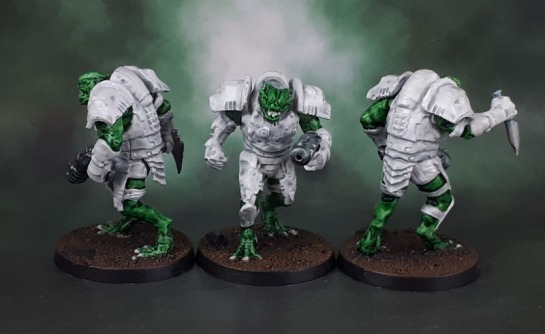 As it happens, my paint scheme aligns with theirs purely by accident, as I’ve only seen the box art for the first time just now after googling it and grabbing the pic from BGG. At one point I considered ochre skin, or green skin with red armour for the “V” look, but decided in the end that I wanted to try out the Ork Flesh and Apothecary White Contrast Paints. You can just how well that worked in the pic above.

Well… that looks shit. I’m just not a fan of that overly saturated  and, well, contrasty green. Especially for flesh, and even including giant space lizardmen. The Apothecary White also didn’t perform well, given how soft and badly defined the details were on these sub-par models and just left.. sort of cloudy stains all over. So with that, this trio sat on the desk for at least 6 months. (These were started before I finished the last Brimstone models, which I posted back in September). Because Tray, they ended up in the queue of shit to get finished. Mostly because I wanted to see the end of them. Which ended up giving me an interesting challenge. 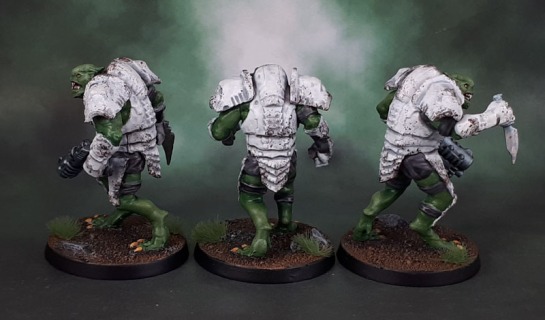 How to fix them? Possibly impossible. Silk Purses and Sow’s Ears and all that. How to make them look passable for a tabletop? Well, first of all, that horrible green had to go. I just went over the lot of it with normal paint, and gave it a careful drybrish up a few lightter shades to smooth it out and have it look okay. The armour? I thought of Sandtroopers and the 501st guys who weather their armour. So out came a bit of foam and the brown paint, then the silver paint. I didn’t do a real great job here in the end, but I gave the armour enough dirtying and dinging up that it now at least looks bearable and (somewhat) hides the soft details. Blood Angels Red Contrast in their mouths, then picking out their teeth and being a little careful with the eyes help a lot to give their faces some detail, which in turn draws the eye. The green skin of the faces is also decent enough, so these factors combine with the dinged paint and weathering to make the shitty armour more of a background aspect to the models than a visual focus. Three different gemstone paints on the armour lights was a final choice to firther give a way to distinguish the three on the tabletop. 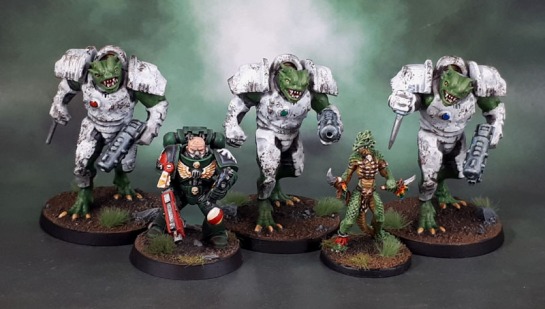 As with a fair few other models from this month, they might count towards Ann’s Miniatures of Magnitude Challenge for May & June. While they’re not exactly gargantuan, they’re certainly Ogre+ sized!