Just a small update today. Last shown way back in June 2013, I ended up finishing these two some months ago. So I’m taking this opportunity to follow-up and show them off – something I haven’t been too good at with my various WIP figures to date. The Lady of the pair turned out not to be a Brettonian, but an Italian.. erm, Tilean. Lucrezzia Belladonna to be exact – sculpted by Chris Fitzpatrick’s for the WFB Dogs of War range, circa 5th Edition – so 1996+. Lucrezzia is basically a display piece, as she was painted for my wife. While I’m sure I could (and would) do something a bit more interesting with the model today, I’ve learned enough about repainting my old models to know when to go in with gusto for a repaint and when to leave well enough alone. I might just keep an eye out on eBay for a second one instead. She might have a small role as a Wizard or even a mounted Vampiress in a KoW force, she’ll mostly be inhabiting the shelf.

I like to add the rear view. You so rarely see the sculpting or any images of the back of the figures we paint, and half of the sculpting and paint is there, after all.

The Ranger definitely qualifies as Oldhammer, either late 2nd edition or early 3rd WHFB. I’m not sure of his origin or name (figures had names back then) I suspect that he’s either from one of the Scenario packs (though I couldn’t find him in this SOL page) or perhaps even a old-school Citadel-era Lord of the Rings model. I certainly remember seeing him in one of my early White Dwarves, circa issue 101-ish, and his paint scheme reflects that – a homage to my memory of the original picture back in my formative years. If anyone knows of his true origin, please let me know. – Update! Eagle-eyed reader Dave Kay found him here. His name is Farendil, Elf Ranger. Even back in the day I would never picked him for an elf, especially with that nose and his great ham fists. I think I’ll continue to use him as a human instead…. 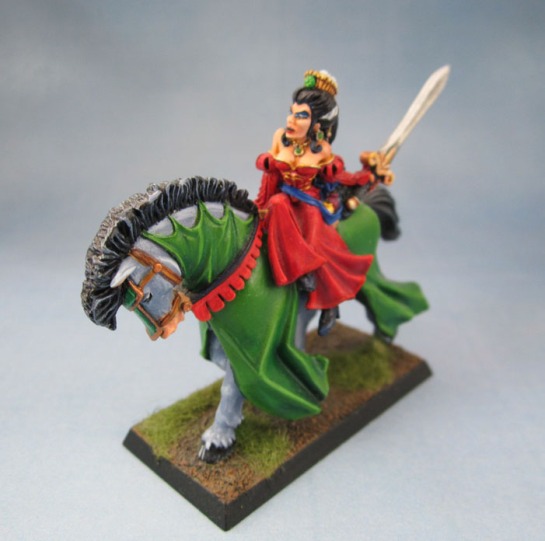 Some of the Oldhammer and modern miniatures crowd alike seem to have their heads disappear up their arses a little bit, with the endless “it was all so much better back then” or “that looks so bad – like a 1990s figure” – and while the mid-90’s really did throw up some dogs in many ranges, and sub-par figures replacing older, better sculpts or figures that have been replaced more recently with better models – figures like Lucrezzia prove that lovely, characterful sculpts have been a feature of all eras.

If anyone out there happens to have a spare of Lucrezzia that they’re willing to part with for a reasonable amount, please feel free to contact me. I promise she’ll be well treated and painted. 🙂