After a bit of a delay (lots of Diablo III recently!) I’ve finally completed the Dark Angels Veteran Sergeant figure, thus completing 1 Section, and therefore 4th Squad. As you can see, I’ve opted for dark green robes with a deep red inner. I never liked it when GW changed that element of their DA scheme from dark green robes to bone coloured ones – so I’m simply ignoring it and painting them my way, but in more of a black-green with a desaturated highlight to help distinguish them visually from the armour. 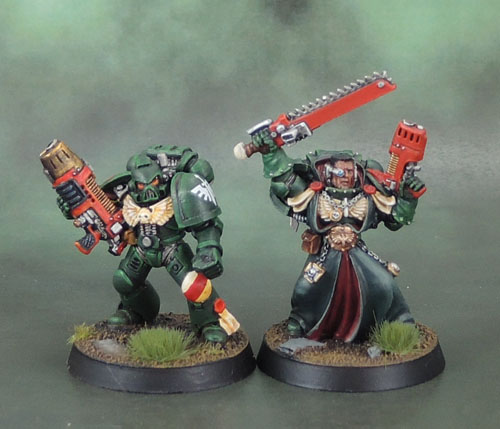 He is one hell of a fiddly figure. While the robes are simple enough, he’s just dripping with extra details, sculpted rather finely as well. This is a figure I picked up a few years ago, rather than having purchased at release. His base tab seems to say “GW01” but 2001 seems a bit old for this model, and he’s not in any of the catalogues I can find over at Stuff of Legends until 2010 – though there’s only abiout thee useful catalogues there covering figures in the Noughties. Maybe the sculptor had a dyslexic moment, or perhaps it was sculpted for some time before being released. I don’t recognise the sculptor, either – perhaps Diaz? That’s something you could do with hand-sculpted metal figures, and as much as I enjoy the new digitally-sculpted plastics, it’s a nice little thing to be able to look at a model and recognise who the sculptor was. Something still very possible with smaller companies, of course. EDIT: Thanks to Alex informing me via the comments, the figure is Dark Angels Veteran Sergeant 1, and was released in 2004. That’s a decent amount of time from the date on the Tab to release, but as we know, it happens. 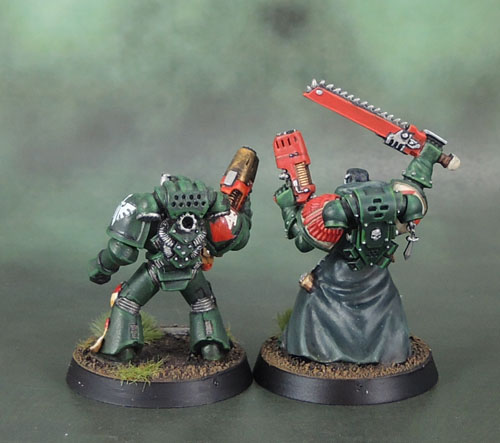 His offsider here with the plasma gun is a metal torso married to a pair of plastic 3rd edition legs. The torso of course came from the Space Marine Bike Squadron, which appealed to me as a cool looking “plasma gun at rest” – as opposed to the limited MKVII armour options at the time this guy was built (there was not yet a plastic plasma gun in the modern style.) …you kids today, you have it so easy. Everything in plastic. Back in my day we had to walk to school uphill, in the snow, barefoot, backwards… 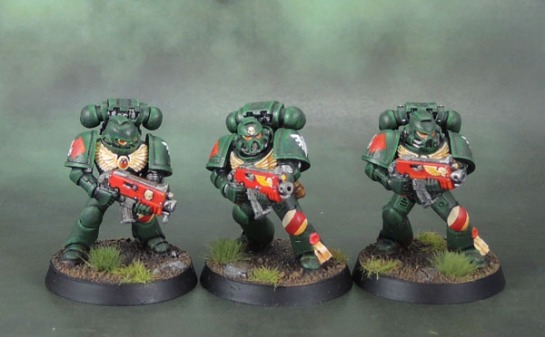 Two of these three are simply plastic 3rd edition marines (with a few pouches added), while their squadmate is the metal MKVIII model with plastic arms. He’s here essentially because of the Sergeant in MKVIII armour that I used in the other squad. It only took 20+ years for us to get the DeathWatch models in proper, multipart MKVIII armour, but I’m sure a few of those could be built and incorporated easily into regular marine squads. Hm…. 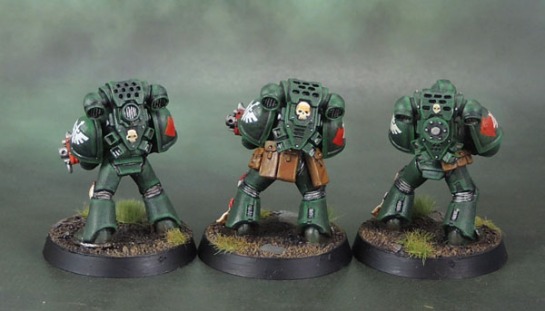 And here’s the back of them.

And here’s the entire squad, finally complete with both sections fully manned now that I’ve finished their new Sergeant.