Once again, Warhammer 40k 8th Edition takes the responsibility for inspiring me to dig these models out and resurrect them into a coherent force. Replacing about thirty kilograms of books, contradictory rules and scattered digital files with a Tabula Rasa has given me the opportunity to step back into an IP I’ve been engaged with since I was a young teen – when Rogue Trader was released and I stumbled onto a demo game being played at Games ’87 (Later Conquest) on a gigantic crashed spaceship put together by a bloke named Andrew B (and co.) 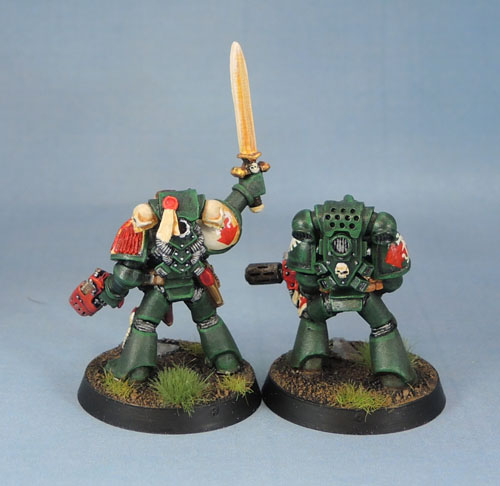 Stripping all of that convoluted mess back to a core rules of 12 pages, with the extra details to be added in via unit entries has annoyed many people who had been playing for years, as their very expensive book collections have been rendered null (excepting for the paint sections, photography and background) and while I understand their annoyance, 40k had grown to a bloated incomprehensible mess that was anything but friendly to new or departed players. The clean slate of rules gives us a very nice (re)entry point to the game, and hopefully GW can keep the meta and power spiral (known as Codex Creep) under control over time. 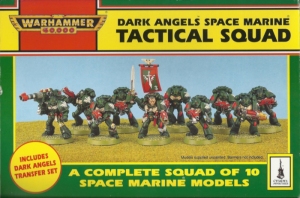 This force was originally inspired during 3rd edition, by Ed B of Powerfist fame (infamy?) when I was at his place one day and he showed me his Dark Angels. I thought they looked bloody nice – and not too difficult to paint. This was during the time when things weren’t yet especially blinged out. I did repurpose a Legion of the Damned backpack for him, inspired by Chapter Master Azrael’s own pack. You’ll note the models in this box are basically just regular space marines, with the exception of the Sergeant. The bright yellow fuel canister on the Melta is a bit of a 2nd edition throwback as well… 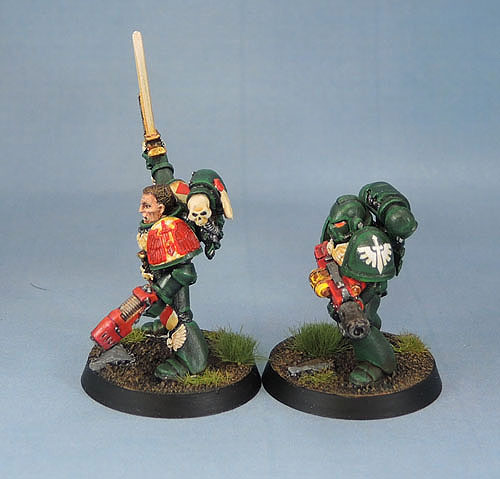 I also had a whole bunch of metal marine shoulderpads. I thought the Deathwing pad looked rather spiffy, though where to use them? The solution was to consider Veteran Sergeants (which were an upgrade option at the time) to be “Deathwing Initiates”. The background speaks of circles within circles amongst the Dark Angels, so I felt that the promotion to Veteran Sergeant justified that extra little bit of fluff – and bling. Hence the bone-coloured pauldrons and red Deathwing Chapter badge. Bone-coloured power sword? Why not! 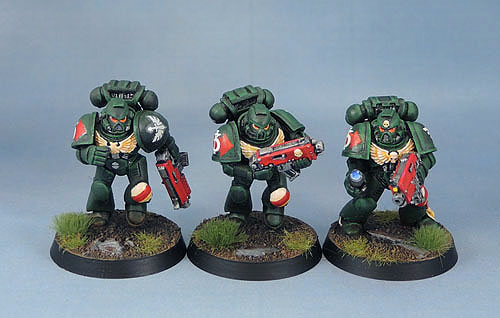 This trip of Tactical marines were built with the notion of being part of the Sergeant’s Combat Squad. I used 3rd ed Assault Squad legs to give them some movement, given that the Sergeant is armed for Close assault and his offsider carries a close-ranged Melta-Gun.

Thus we have the first Combat Squad: 1 Section. Kitted for a close support role and capable of doing some damage. Originally, these guys were built as a seven-man squad under 3rd edition rules with the role of riding around in a Razorback (which I never got finished). I shall folllow up with 2 Section shortly.