Assault Squad Terath is the third of my Dark Angel squads that I built back during 3rd edition Warhammer 40k. Originally 8-men strong, I’ve recently painted an additional pair of models to bring them to full strength for 8th edition. 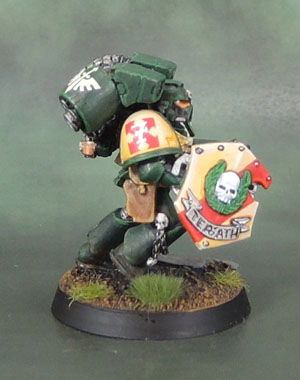 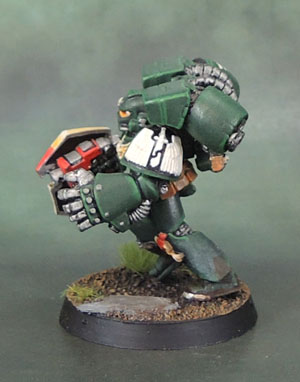 The Sergeant is originally from the second range of Blood Angels Death Company figures, specifically #5  – These were created via Mike McVey’s sculpting of additional details over the top of Jes Goodwin’s plastic marines, recast into metals. I chose him as he was clearly an assault-style marine, was different to the one (or two) “standard” Assault Sergeants of the day, had some bling and was easily armed with whatever I wanted due to separate arms. I gave him a Power Fist and Bolt Pistol/Combat Shield Combi, which I decorated with the Company badge.

The “special” weapons of those squad are a pair of Plasma Pistols. My next Assault Squad (for whichever Astartes force) may well have a bit more variety in it in terms of Flamers and Eviscerators, but like most all of my “resurrected” squads, these guys remain armed with what they were armed with originally. 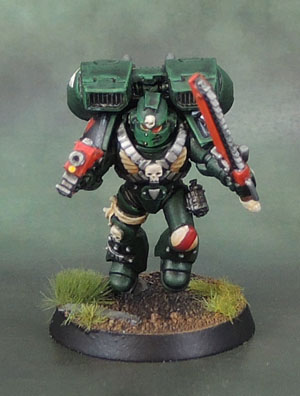 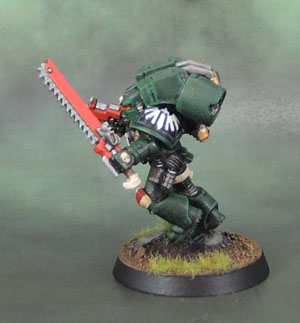 The Squad Corporal is one of the two models I built and painted recently. In game terms he’s identical to the troopers in the rest of the unit. In the event that I (or anyone else playing them) decides to split the 10-man Squad into 5-man Combat Squads, he’ll be the one to lead them. No functional difference of course, but the model follows the lore – which is how I like to do things. He’s built from a mix of plastic Marine Vanguard and Assault parts with a metal DA shoulder pad and a Templar “knight” style head. 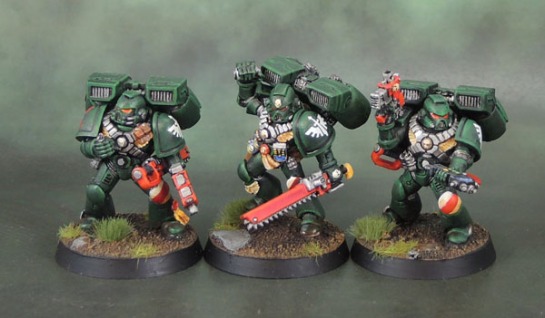 The troopers are made up of two trios of figures. First there’s the 2nd Ed Assault Marines with 3rd Ed arms and weaponry, and then there’s the 3rd Ed Assault Marines, using Tactical (standing) legs in order to fit in better with the 2nd Edition models. (And to free up some running legs for the “charging forward” element of 3rd Squad!) The central figure with the 3rd ed helm is the second of the 2nd edition metal Sergeants released, with a headswap to a plastic marine. He would have been the squad Corporal, except I preferred to incorporate the metal shoulder pad as well as the pad with the nameplate, and both in black – and I didn’t want to mess with this figure beyond rebasing him as he was completed back in the day and I’ve always been quite happy with him. The second of the figures painted to bring this squad up to 10 men is one of the 2nd Edition metals above. If it’s not obvious which model it is of the three, then I’ve done my job of making the new guys fit in with the old.