I actually started these models back in 2005, using a mixture of Fantasy and 40k Brian Nelson Ork components. I was originally making up one of those “Combat Patrol” forces (which is also how the DA and IW started life), though the entire Ork project was derailed hard due to a family tragedy which really hit me very hard. I’ve been eyeing the Orks I’d started back then a bit in recent months to get out and finish, and now I’ve started on them again. It’s been one of the reasons I’ve been getting back into painting the odd fantasy Orc and Goblin this year. Kind of “warming up” my greenskin painting skills. This army is going to be a tribute of sorts, so I want to do it justice. 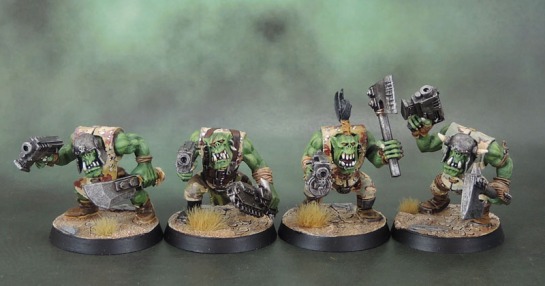 The CP force originally had 2 mobs of 10 (or 12ish?) Boyz. One mob of sluggas and one of shootas, with ‘heavy shootas and rokkits as the support weapons, along with metal Nobz, led by a Warboss and with some grotz and a slaver on the side. While they were all (mostly) built, none were actually completed in terms of paint, so I’m getting onto that now – along with making some additions. I don’t want to get carried away though – if I’m working on too many forces, none will get done to any satisfaction, so the Greenskins will be a nice side, palette-cleanser project for the time being, and I can take a serious look at them when their codex comes out. If I can get them to around PL30+ or so while painting them in this way, then so much the better and they can hit the table before the book comes out.

I went with camo (or “kamo”) for their scheme because I enjoy painting it. It’s a lot more work than painting them in more basic browns and greys and blues and reds or whatever, but this way painting them manages to keep me interested. I won’t be doing too much with heavily green-based camo, since their skin is green and I don’t want them to blend into one another. Also, being Orks, I can vary the patterns and colouration as much as I like, since uniform isn’t exactly a strong concept to them.

While I guess painting them in camo makes them nominally Blood Axes when it comes to having to choose a Clan for rules purposes, I have to admit I never liked the Ork Clans or many of the background changes when it was introduced during late-RT and early 2e. The whole “fungus men” thing has never sat with me, so I simply ignore that aspect in my own head-canon. (Similar to how I ignore “Mon’Keigh – and may Gav Thorpe forever burn in hell for that one!) Some of the Clans were conceptually okay (Snakebites – the semi-feral Orks, for example) but too many of the examples and paint schemes went way too far down a ridiculous and garish road, reducing Orks to a silly sideshow of the comedy joke army of the 40k universe. I can handle a few jokey things, like squigs and the way gretchin are portrayed (and the Goff Rokk Band), but generally speaking, I like my Orks guttural, angry and brutal, and want to reflect that with my force. Much more original RT-Rulebook (and ironically, 3rd ed Rulebook) than ‘Ere We Go. 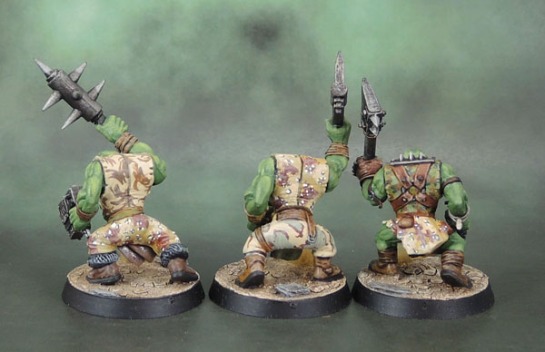 Anyway, these are the first of what may never be a huge army (horde armies have a LOT of models to paint), but what should be a cool looking, brutal force. 🙂
I’m glad to have these guys back on the painting desk after so long.