Taking a brief diversion from Dark Angels (still need to finish their Tac Sergeant – hopefully later today!) – but instead I have the Bolter half of a Devastator Squad for the Minotaurs. Once again, with luck I’ll finish the heavy half of the squad later today, but with poor weather for spraying in general, work tomorrow and so forth, it’ll likely be a few days at best until I can get them photographed and posted up. 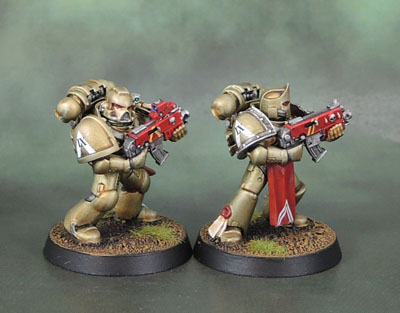 As with a lot of my Minotaurs, I’ve added in a few third party components here, which today are all from Anvil Industry, who are one of my favourite suppliers of unofficial bitz. Two of the marines have scopes added to their bolters while once again I’ve sprinkled in a couple of Anvil’s “Spartan” helmets. The tabard is also from Anvil, though they’re currently OOP for some reason.

The other additional parts are of course Forge World’s Minotaurs shoulder pads that look pretty impressive as always. My only gripe with them is that some of them seem completely inappropriate for the left shoulder pad. I did finally come up with a solution for that, which I’ll post up a bit later on.

Anyway, I hope you enjoyed this short update, and hopefully I’ll have more from both the Dark Angels and the Minotaurs ready to show and ready to go very soon!