Today’s model is (was?) my first completed model of 2019. It’s a model I’ve had for a few years now. Bearing the evocative name of “Mountain Orc Hero B” – it was actually a bonus from my Pre-Order of their plastic Mountain Orc boxed set (Not-Savage Orcs, basically) back in 2014. I started it not too longer after I got it, but then I wasn’t happy with the scheme I’d started, so as a result it just sat around for a couple of years. I later restarted it, with a more traditional Orcish flesh tone, but it didn’t get much further than simply (re) base-coating the flesh.

So a couple of months ago, I tried to paint this and a few other greenskins for Orctober, and while I got some Goblinoids done, I also didn’t manage to finish a whole bunch more, including this guy. I tried again for Diabolical December, but again due to all of the things that went on last month – no dice. I put a small amount of work in on NYE, and ended up getting onto him properly on New Years’ Day – getting him completed. 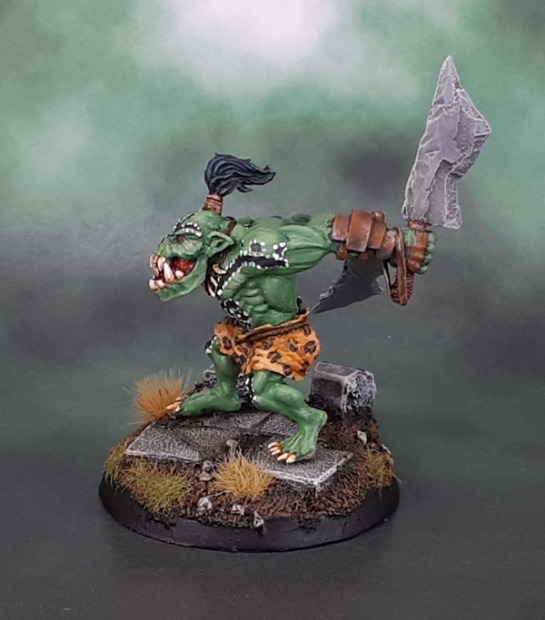 From the first time I saw the “new” Savage Orcs in White Dwarf, back in 1992 with their blue woad-half-facepaint, and their red faces, and their white faces, I had an idea on how they’d look much, much better. Later, when I ended up with a bunch of them myself, I kept this idea in my head, and now, in Twenty Eigh… Nineteen, I’ve finally painted one of them using that scheme. That scheme of course, being warpaint and bodypaint inspired by the traditional designs of Indigenous Australians, or Australian Aborigines.

Why? Well, for one thing, I’ve never, ever seen anyone use their designs as a basis for anything on wargames miniatures. Secondly, I’m Australian, so it seems appropriate to represent in a fashion on some (more) of my models beyond my Imperial Guard. Thirdly, and this ties in with the first point to an extent, it looks unique and rather good on the model(s), just as I’d envisioned over 20 years ago.

The model itself is a nice display piece, but unfortunately alarmingly impractical for gaming purposes. I had to pin him to get him onto the base, and those thin, thin resin ankles make me wince when I look at him. He came with a 25mm square base, because Not-WHFB, but I put him on a 40mm round base instead since those weapons extend WAY out to a ridiculous degree, so it feels like bumping him on a table, or even looking at him funny will snap his fragile looking limbs or weapons right off! Ouch!

Well, that’s today’s model and post sorted. In the next few days I’ll have a couple of other little things that just missed Diabolical December and were instead finally completed on January 2nd, and then I’ll try to get my personal December wrap-up done for Saturday’s post.