Beginning December’s round-up, we have an absolute fucking beast of a model from Pandora’s Bits Box, courtesy of Krakendoomcool. A heavily converted Khornate Knight. Pandora’s post has a lot more photos, as well as step-by-step shots of the WIP process that it took to get to this point. Well worth checking out, because this thing is Nucking Futs. Oh wait, this is my own blog, so I can swear as much as I like. IT’S FUCKING NUTS!

Next up, we have a nice selection of models from Cascadian Grimdark‘s Alexis West, aka Westrider, who completed an impressive number of both Dauntless and Diabolical characters in December! Starting off, we have the Diabolical Ogroid Thaumaturge from Warhammer Quest: Silver Tower.

There are also two groups of characters – the Dauntless Chosen Axes from Warhammer Underworlds: Shadespire, featuring custom-sculpted clothes and boots(!)

The final group is a good chunk of the Dauntless Elucidian Starstriders – the Rogue Trader’s crew from the Kill Team supplement.. Rogue Trader. Hopefully we can look forward to seeing the rest of the crew joining their vanguard in the next months? 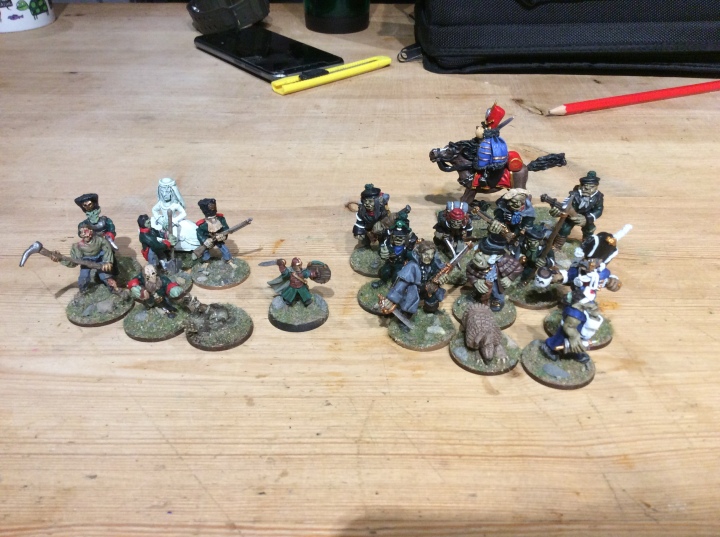 maenoferren22 completed quite a lot of models in December that can be viewed over on his Bogenwald blog. So many, that I’ll whip through them and provide links to each, so that they may be seen in all of their glory.

Ghost Bride, from Alternative Armies. Sir Willorcby, a civilian noble from the Flintloque range, Captain Fredorcson and his lads the Chosen – a kind of Orcish Sharpe troop of individual characters. “Nursey“, an orcish nurse, who looks like she’d fit perfectly into Blood Bowl and has a name that makes me think of Blackadder II and her companions Rogipoos and Jose. Next we have Meriadoc Brandybuck, from the Fellowship of the Ring, some, erm, Undead Engineers, and an Ostarian Hussar Officer. 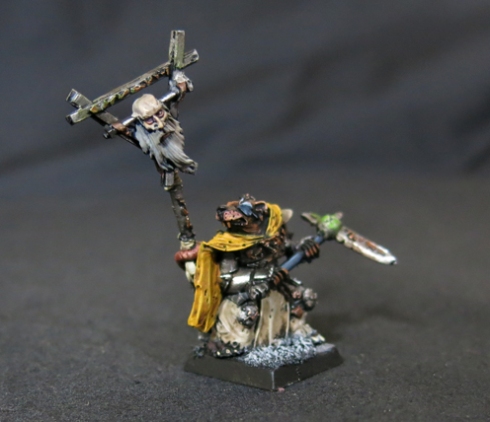 Wudugast, from Convert or Die has Snuggles the Sump-Croc for us this month, not to mention this Skaven commander. I’d also consider the various Goliath gangers of the Irondogs that he finished in December to be eligible as well. Rather than poking through a month’s worth of Wudu’s posts, I’ll just drop this group shot of the Goliaths in here. I know quite a few of them were completed in December, and they certainly deserve to be seen…

Argentbadger of The Bovine Overlord continues his foray into the Trollblood Hordes with his Dire Troll Marauder from, um, Hordes. He certainly gives a strong “Hulk SMASH!” vibe.

Also from Argentbadger, we have the Satyxis Blood Priestess, also from Warmahordes, though this time of the Cryx faction, and maintaining the same pink and black sheme that we saw in her stablemate Barathrum recently. If you like her, go check him out as well. Then join me in pestering AB for some group shots – especially of all those Trollbloods! 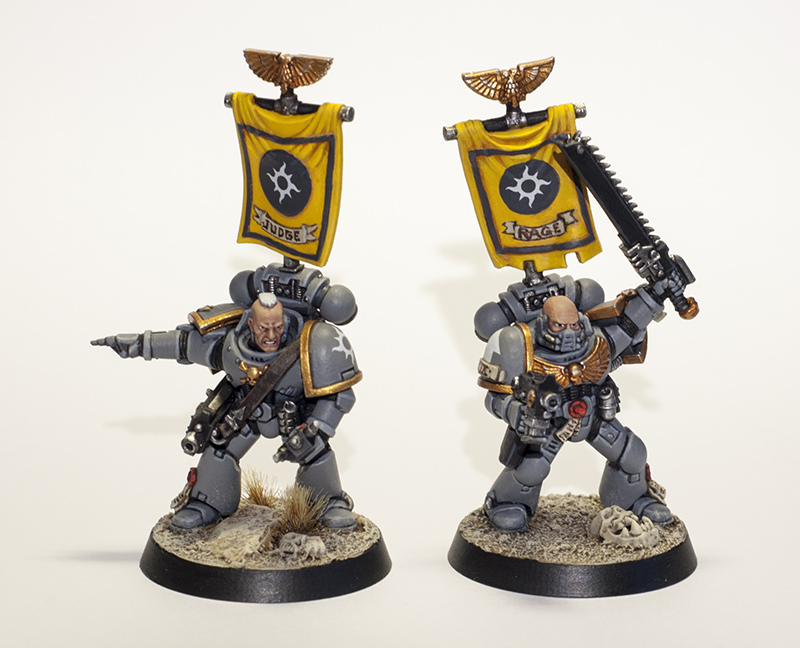 mcmattila, of a new possible blog this month, completed a pair of Space Marine Sergeants. The one on (our) left is a plastic reproduction of an old-school metal sergeant model from the 3rd ed.-era Command Squad, and also the sergeant from Battle for Macragge box – And I have to say he’s done an amazing job on both the conversion and the paint. 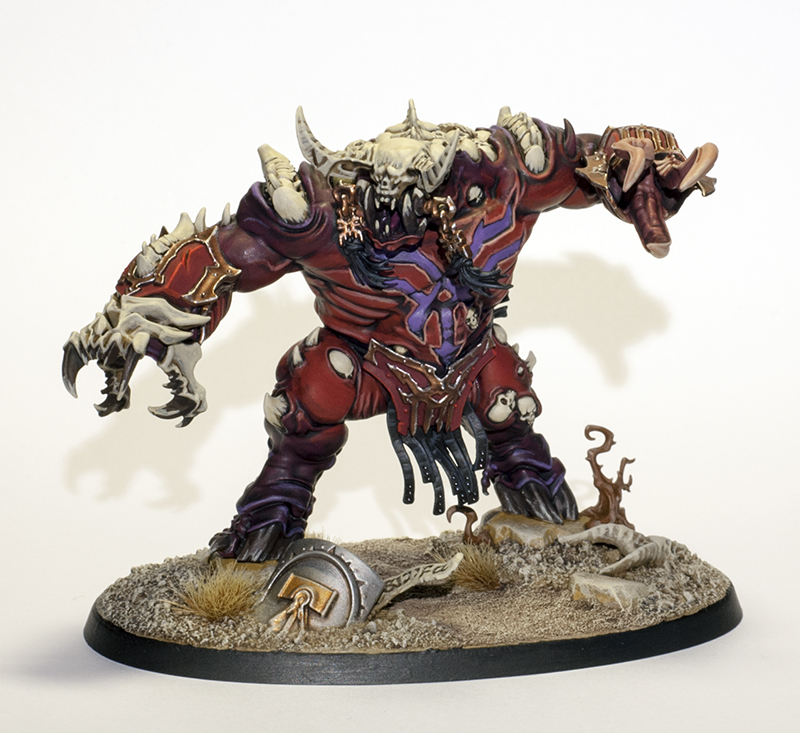 mcmattila‘s other model for this month’s showcase is a Khornate Khorgorath, from the original Age of Sigmar starter box (and now from a pretty good value Start Collecting! set). Once again, it’s an impressive paintjob on this guy! Let’s hope mcmattila is able to start up a blog sooner rather than later, as I’m looking forward to seeing much more of his work!

Faust from Doubledowndice completed one of the final few Star Players for his Blood Bowl Team. Flint Churnblade, so named for his heavy duty chainsaw which he takes to the field with. Not too many more to go now for a fully-complete team of Dwarves. Unless he goes for the Escher first..? Or the hated Van Saar?

Mark Morin, who posts under the tricksy pseudonym of Mark A Morin completed quartet of British 8th army tanks for his burgeoning “What a Tanker” project. Specifcally, two each of the A9 Mark 1 Cruiser tanks, and M3 Stuart “Honeys”. Given what Mark has finished since he posted these four up for Dauntless December and my tardiness of getting this post, um, posted, it’d be remiss of me not to point out his more recent post, containing a hugely impressive British Motor Pool that he’s just up and painted over the last few weeks! Seriously. If you like these four, go check out the baker’s dozen he’s got there.

Here’s a preview. Now clicky the piccie and check out the rest of Mark’s post!

Alex’ paint on an Oakbound Miniatures model that is completely not Nagash.

Alex of Leadbaloony finished this Diabolical figure in December. A reimagining sculpt by Oakbound studios Not-Nagash inspired by on the Mark Gibbons artwork, that is most definitely not the 1990’s most infamous Gary Morley sculpt of Nagash.

Pete S/ SP from SP’s Projects Blog, following the “Diabolical” theme of the month, assembled and painted this kit of two Hell Cannons from Ace Models. What are Hell Cannons, you ask? I’ll let Pete explain:

Hell Cannons are the name given to large improvised mortars that have been built by the rebel forces/ Free Syrian Army in the past few years. Consisting of a large metal pipe fixed to a truck axle they fire homemade shell that are mostly made from propane gas canisters. As can be imagined they are not particularly accurate and neither do they have a long range, barely reaching over a mile. A more in-depth  look at them can be found here .

What really stands out to me about these, and especially so on the single-model images on Pete’s blog, are just how realistic the kits and his paint are. If they weren’t base on little squares (or on much larger squares – credit for those bases as well!)  you’d think they were photos of real ones. 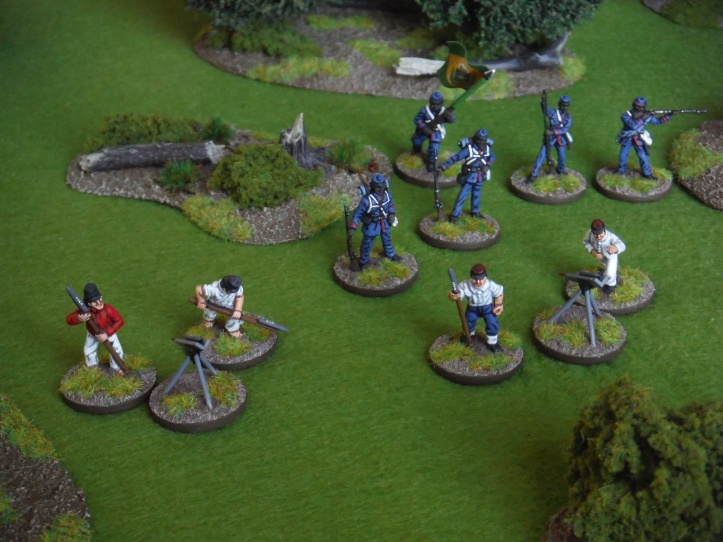 Following the artillery theme, Just Needs Varnish from Just Needs Varnish scratchbuilt (of course) and painted a trio of Paraguayan War rocket launcher teams. Well, he scratchbuilt the rocket Launchers. The teams he painted. Though he did modify their tiny little hats from kepis into shakos before doing so. Some great WIP photos also feature for any budding pyromaniacs who would like to scratch-build their own rocket launcher teams.

Krautscientist from the Eternal Hunt completed a nasty little diabolical quartet, dedicated to Grandfather Nurgle. From left to right, we have a Pair of Poxwalkers, a Plaguemarine and a Plague bearer. PPPP! Or as he prefers, the Keepers of the Eternal Garden. I can’t wait to see how KS grows this warband in 2019!

Dave Stone, of The Gamer’s Cupboard has completed a rather epic sized diabolical contribution – an Imperial AT-AT scaled for 28/32mm gaming. I’m not sure if it’s the old WotC one (which was an awesome model for anyone who managed to pick it up) or if it’s from a different source. 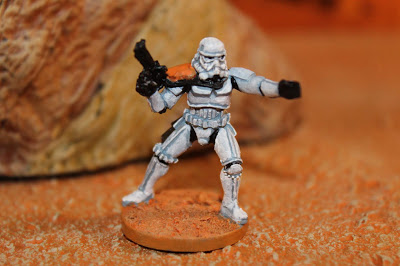 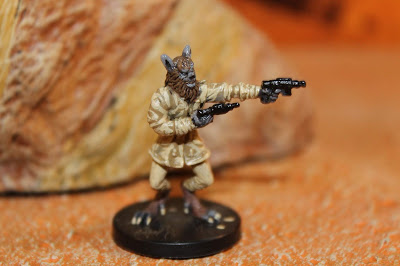 Dave also completed a diabolical comrade for the AT-AT, Kayn Somos – a named Imperial Character from the Imperial Assault boardgame, as well as Lak Sivrak, from the famous Cantina Scene in the original Star Wars/EpIV. 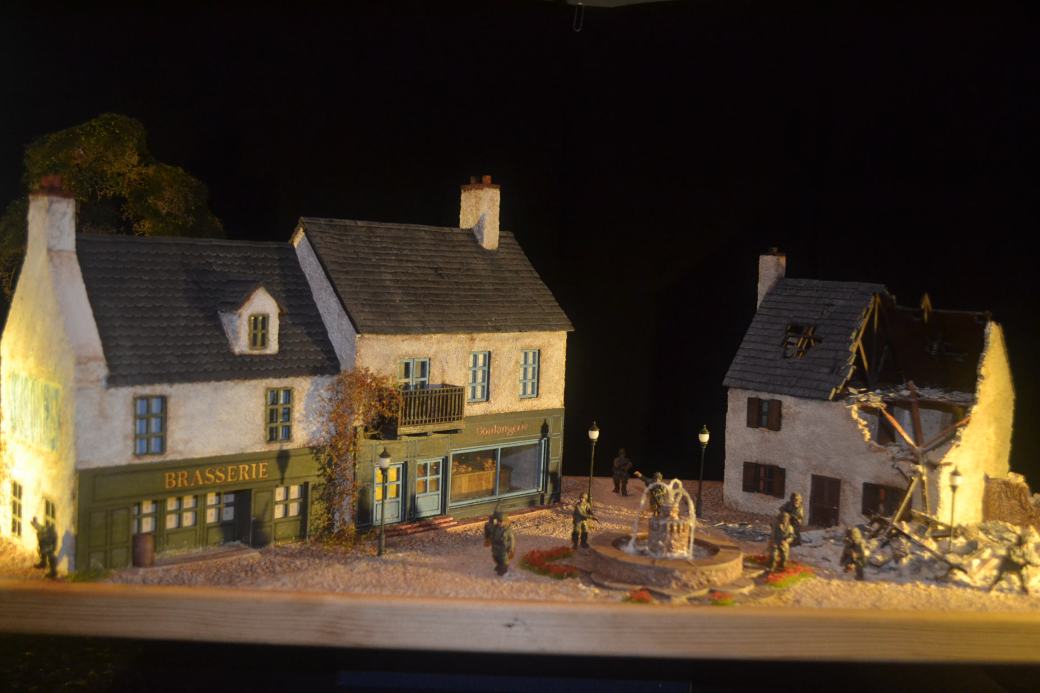 The Imperfect Modeller again came up with more than one diorama this month, and I have to say that he’s really outdone himself. Which is saying something. “Operation Overlord” has been an epic to watch go through the various WIP stages over the last weeks before its unveiling. LED Lighting. Bread in a storefront that looks like actual bread, and sweet narrative throughout the piece. Do yourself a real favour and check it out on his site, and then go through the WIP posts to see how it took shape. TIM has really outdone himself with this one!

As much as I’d like to say that TIM‘s next diorama is no less impressive, that’s just not possible to say. With that caveat in mind, I think ‘X’ Marks the Spot is still very cool and tells a story – albeit one that’s not nearly as complex as Overlord. That’s the trouble with setting the bar so high, as I’m sure Pandora is also feeling. Still, as long as TIM can keep outputting models as good as this one, he’s in no danger of disappointing anyone.

Finally, my own Dauntless and Diabolical contributions, posted up last week and shown in much more detail throughout the last month of my blog posting.

Is your own Dauntless/Diabolic December post missing from here? If you left a link in the announcement thread, then it should be here and I apologise. If there’s no link there, then leave one here. I may seen, read and even commented on your post, but I’m damned if I can remember each and every blog post I go through each month!

I’ll be doing a 2018 reflection/2019 aims post shortly. But we’re having a little heatwave here right now, and it’s going to be a bit of a task arraying all of my 2018 models on the table. I’m also pretty tired all the time, but I’ll talk about that when I post that up. In the interim, I’ll be posting more models and scenery – though I’ll give this post 2 days as the many people’s hard work arrayed above deserves some extra time to sit at the top of my page.