A couple more painted Bones this time. One from the Kickstarter, the Battleguard (Iron) Golem, and another pre-KS model – the Troll.

When painting the “Iron” Golem (as he’s commonly known), I wanted to play with warm metallics (copper, bronze) and verdigris, so I happily disregarded the “Iron” portion of the model.

Much of the model was actually fun to work with. I utilised a lot of heavy drybrushing that worked well on the model to bring out all the slight imperfections of the cast, and helped to create a bit of a pitted, cast-metal look, which was perfect for my ends. The rear shot of the left forearm shows it pretty well. While I’m not especially happy with the way the sword blade turned out, being a cheap Bones model, I’m happy to call it good enough. The plastic of the blade was uneven and frankly an unpleasant pain to work with. The face was a bit of a mess. To sort of salvage it, I just painted it gold in the end, and gave it a hit of ink and a small highlight. The gems on the back of the shoulders and sword blade, and also the eyes were done using the usual GW-style gem technique and hit with gloss varnish. For what it’s worth, I think the glowing OSL effect on the Reaper website looks better, and if I’d seen it earlier I probably would have ripped it off, but c’est la vie. 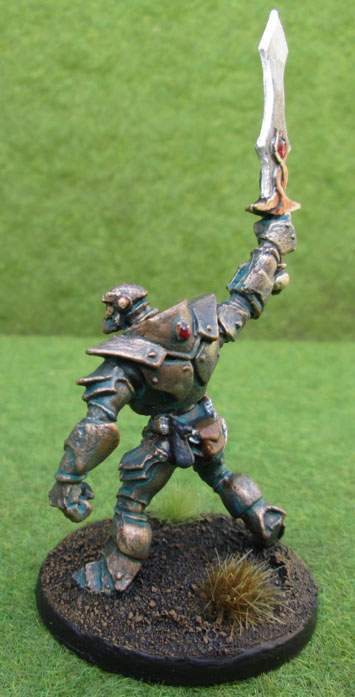 The bags and chain on the back of his butt were a badly-cast mess, and so they got a very quick “good enough” job. The real highlight of the model to me was playing with some new mixes of paint washes along with the layered drybrushing to create the aged verdigris effect, which will no doubt make a reappearance later down the line on some venerable space marines of some description. I also did some dungeon furniture at the same time, which I’ll have to photograph down the line and show here as well. Base is my usual for this kind of thing – Proxie models 40mm round base with the plastic Bones base glued on top and a bit of acrylic putty to flatten it all out before sand and Army Painter tufts.

Anyway, as a low-stress learning experience and relatively fast model to paint, I consider this guy to be a success. Now he can sit on the shelf until Pathfinder calls him to duty! 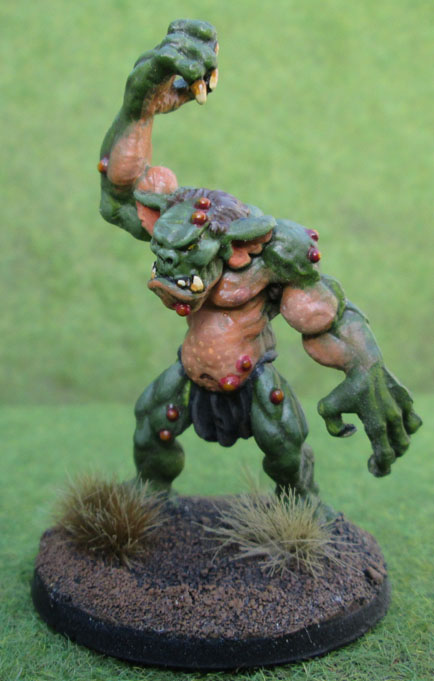 This guy, like the Purple Worms from the last post, was a Bones figure I picked up before the Kickstarter campaign who spent most of the last year part-painted until I finally finished him properly more recently. The “learning experience” with this guy was to practice blending from unnatural skin tones (ie, the green) to more natural ones (the flesh). I saw some fine work done in this manner on Citadel Dragon Ogres many years ago, and it’s also been used to some extent on the LotR trolls – which is one of the places this guy can do duty, along with Pathfinder and wargames like Warhammer and Kings of War. 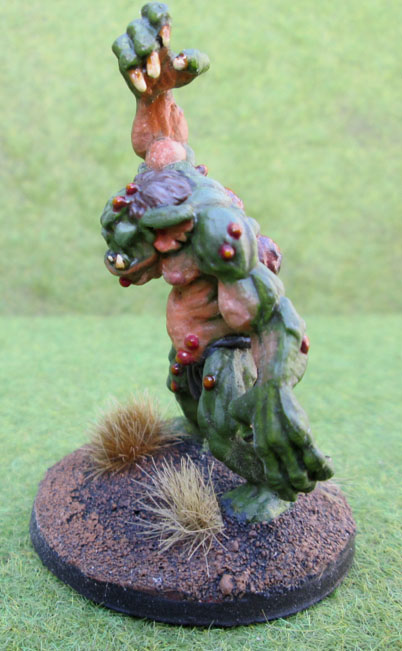 The paint was originally a bit nicer, but it got severely messed up (in my opinion) when I hit the finished model with Army Painter’s spray (matt!) varnish. The model got a nasty shine, some sandy “frosting” on his limbs, and it also attracted a bunch of tiny little hairs. I’ve gone over it with paint-on Vallejo, but it’s still not quite right. The base used the same techniques as listed above for the golem, but not as successful, and being a cheap bones model I’d prefer to buy another one and do it again then spend the time to rework the whole base – ie “good enough”. His claws are badly defined, and the facial details are a bit soft and sloppy – picking out the eyes was not easy. Blending the pustulent and infected looking boils into his skin was fun as always, but despite my misgivings about the casting of the figure overall and especially some specific parts of the model (claws, face) – and even the messed up finish thanks to the Spray and my sub-par job on the base, I find it to be another successful practice model. Good enough for Roleplaying and certainly tabletop quality for wargaming.