As seen awhile ago, one of the things I’ve dug out of the pits of half-finished hell was a Dark Angels Dreadnought – old-school heavy metal style, dating back from 2nd Edition 40k. Back in the day when the dreads were all-metal, the only way to get hold of the different weapon options was to buy the different chapter dreads or order them from GWUK (not the simple thing it is now with the Internet and online commerce). So some things have definitely changed far for the better since then.

Anyway, as noted previously, the paint on the arms dates these arms back to 1997 (when I added the nWo logo) and then 1998 (when I went over it with the red of the Wolfpac). The original painting of this model would have been when 40k 3rd edition was released and the uber-combination of dual assault cannons on Dreadnoughts became a thing of the past. When I restarted painting this guy, I blinged out the model a little more with plastic bits from more modern Dark Angels plastic kits.

Back in the day there were no “left-handed” Assault Cannons and dreads were 100% metal models, so I cut up a right handed one (in metal) and a Missile Launcher left arm (probably the original one from the DE Dread kit) to make the above. With the Contemptor Mortis pattern Dreadnought being a thing that exists these days, I added a magnetised cyclone missile launcher battery to the top of the model with optional DA-Icon Bling for normal games. I’ve never been a fan of ginormous banner poles on things, so that’s something I didn’t bother with at all. Both arms are already magnetised, and so I may paint up and magnetise a normal Power Fist arm for an option at some point in the future. 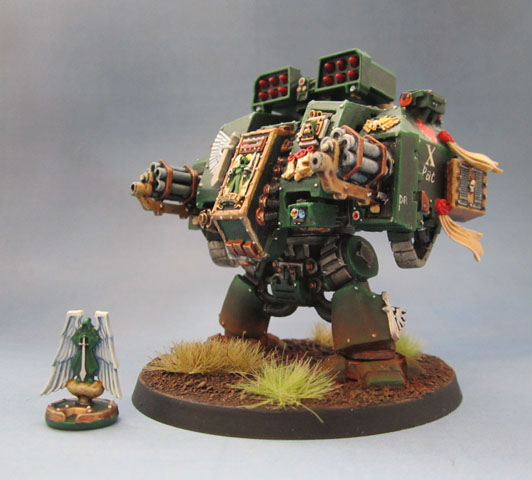 Side shot of Dark Angels Dread. It’s turned out pretty well, I think.

I’ve costed the thing out with dual AC for very friendly local games, based on the costs for the various other arm weapons. Since the Rifleman Dread is also a thing these days, it’s not as offensive as it might have been a few years ago. But really, the main thing here is rule of cool since for the time being it’s mostly going to see action from the inside of my display cabinet till I get some more armies costed up and built. Not to mention finishing these Dark Angels.

Note the kill-markings from 2nd edition on the Assault Cannon arms – looks like each one racked up a Dread back in the day. I didn’t bother keeping track of infantry, and Tanks weren’t as ubiquitous in 40k as they are today.

With Cyclone Missile Launcher Swapped out.

As can often be the case, I think the model looks far better in hand than these pics show. C’est la vie, I guess. Small details always show up like huge pimples and dimples when something is blown up this much. 😉

The experiment with salt weathering didn’t work out at all. However, the weathering powders on the feet and lower legs of the model did turn out quite nicely. Trying for a mid-ground between the pristine factory-fresh paintjobs that so many vehicles and walkers have the the more realistic and weathered painting that looks so good.

Well, that’s it for today. This guy was finished a month or more ago, but with midwinter here, decent days to take photos have been so few and far between the photos had to wait.