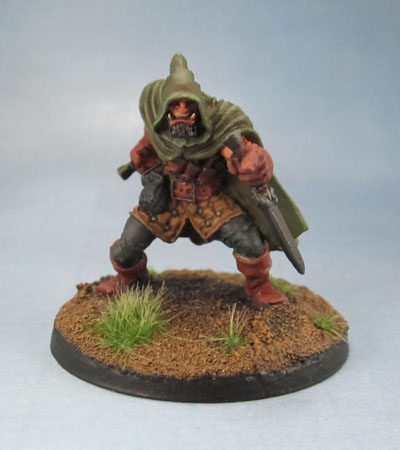 Something a bit different from the norm again today. A few years ago now there was a time before Zombicide and Borderlands 2 when my gaming group spent quite a few evenings playing through those D&D Boargames. I’ve shown off the odd critter from Ravenloft and Ashardalon here before, but this guy is from the other side. A model purchased to represent one of the player characters. I actually created a huge list of (mostly) Reaper Miniatures to better represent the player characters as I was never particularly enamoured of the PC models that came in the boxes. One such character was the Half-Orc Thief. Needing one of those, I browsed the Reaper online catalogue and saw this guy, a lovely Tre’ Manor sculpt. Shortly afterwards, he was mine.

Since I’m no fan of broccoli bases, I had to base him on something plastic and round. A Proxie models 40mm round base was the best and most appropriate thing I had, if a little large, but with his stature and wide-legged stance, this was the smallest thing I could fit him on. 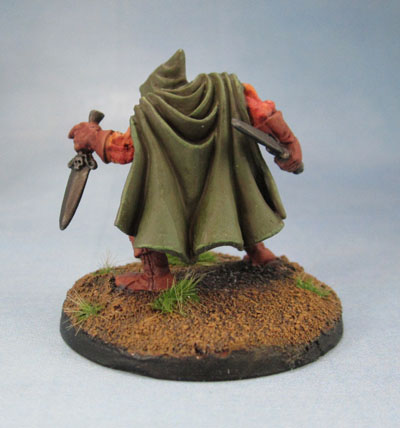 The most important thing was to work out a palette that worked for a rogue, was somewhat realistic (for a fantasy trope) and wasn’t completely boring. That means an all-black outfit was out. It might be the “obvious” go-to for a rogue or thief in some ways, but I also thought it’s the sort of thing that’s very likely to attract lots of attention if he were to be walking down a street or sitting in a tavern. Kinda like a sign saying “YES I AM A THIEF”, or a guy in a ninja outfit sitting in your local Starbucks. So I wanted to use some colours. Secondly, this guy is a Half-Orc, not a weedy Elf, so I wanted to go for muted, natural colours instead of rich, opulent colours.

The result was dark grey leggings, a brown leather padded jerkin, and for a spot colour, red-brown gloves and boots. Pouches in dark grey again, and a natural woodland green for his cloak. The sort of thing that would be dark and dull enough to provide some camouflage in a town or out in the bush. His dual-wielded daggers are painted in the Vallejo colour called “Metal Black” (Or Black Metal!) – which is a really dark, true gunmetal colour. No shine, no highlight, no picking out the pommel or crossguard in bronze, or painting the little skulls on them in bone or gold or whatever. They’re bloody rogue’s daggers!

Anyway, this guy – like so many other figures – sat half-painted and mostly forgotten for a couple of years before I chose him a couple of weeks ago to get done and dusted. Within a day, he was finished. Since we’re not playing the D&D games at the moment and haven’t played Pathfinder in a year or more, now he goes into a glass cabinet until needed at some point in the future. At least he’s done, though!