Standard Bearers, you ask? Yeah. GW Never made any, but that’s not important. They only produced three sculpts of Black Númenórean Warriors, and that was it. As fate would have it, I had two Warriors of the same sculpt who both had their swords broken off. I really wasn’t sure what to do with them for awhile. Repairing those swords was right out since drilling into sword blades is a fool’s errand. Make a polearm? Drop an axe in there? Bin both and just replace the models entirely? Ah, maybe it’d work to try and put a standard in there?

So I did. It worked. 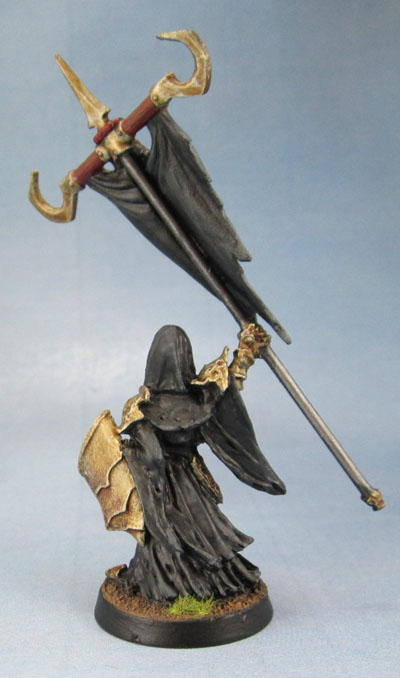 Originally, I’d hoped to freehand an inscription into the flag, but it was just too small and ragged to do so. I spent a couple of hours working out an appropriate inscription, translating it into a bastardised mixture of Adûnaic and Black Speech (to stand in for Black Adûnaic, and because the available vocabulary of both are very limited) and even worked out how to write them in Adunaroth, thanks to another speculative page online. Then it was too big for the bloody banner, and so I just painted in the Eye of Sauron instead. Blah. Yes, the angle of the drapery and skulls look a little odd. at first. That is until you realise that he’s in the midst of thrusting that banner skywards at an angle, and that’s why it’s all trailing behind at such an angle. You see? Reasons!

But what to add? What to use? Whatever it was, it needed to be spiky and unpleasant. After rejecting the Dark Elven banners that I had, I settled on these two, from the GW Chaos Marauders sprue. Both looked spiky and evil enough to pass for the fallen men of Númenór – and fit in well enough with the GW models. Sure, the skulls are a little big, but they must be from non-humans. Olog-Hai or something, right?

In the end, I managed to turn two junk models into what will become the centrepieces of their unit(s). As with the Wildmen, Golgfag’s Ogres and quite a few other models from the last year or so, models I disliked for whatever reason have become models I’m really pleased with – which is always especially satisfying! I’ll get some full unit shots of these guys and their cohorts up soon. 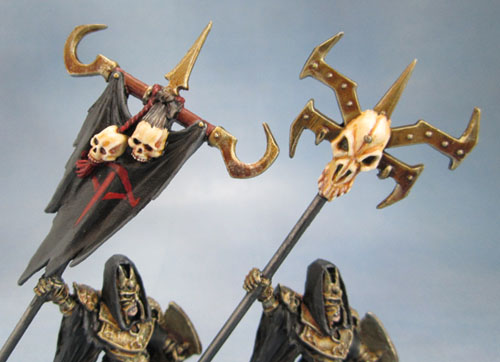 First I have to finalise their leaders, and GW Mail order sent me the wrong blister, so I need to get that sorted out first. GWAU’s customer service is really hard to get hold of these days for some reason – I’ve been trying to get the guy on the phone for three weeks and only succeeded once, just before he went home on a Friday night over a week ago…