What? A Castraferrum Dreadnought? Are those even still a thing? It’s ok. I have a Contemptor lined up for later. Anyway, enough sarcasm.

The Minotaurs Space Marine project that I’ve been working on (albeit slowly) has featured a lot of models that aren’t considered particularly exciting these days. Late-RT/2nd Edition Metals, Assault on Black Reach marines, 2e starter box marines and so many refurbished marines. On that very same theme, my first Minotaurs Dreadnought is simply an AoBR (5th Edition starter, 2008) plastic dreadnought.

As with most of these things, I started it ages ago (less than a year ago this time!) and only completed it recently. Almost by accident, really. One positive (I guess) of my “butterfly” painting style is that there’s pretty much always something reasonably cool that just needs a little bit more to push it to completion. My randomly picking up this dread off the desk on a Saturday afternoon and making myself actually complete it being a prime example…

The model is pretty much stock AoBR. The only additions being the smoke launcher on top and a few bits of Forge World’s Minotaurs Brass Etch – the Icon on the front of the sarcophagus and the Lambda with wreathed Phi on the left shoulder. A single Minotaurs transfer on the right shoulder and a Lambda (from Warlord Games’ Spartan set) on the right greave. 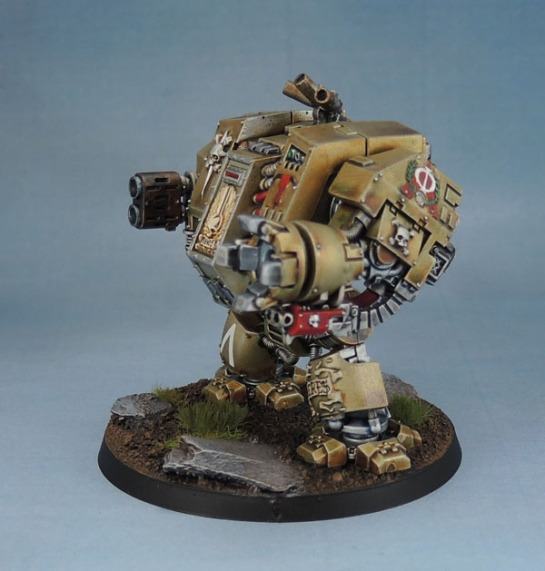 Luckily, the arms are tight enough that they don’t require any glue or anything at all to leave them both poseable and potentially swappable. The painting method was achieved with the same method as the regular Minotaurs – the model was sprayed silver, then zenithally highlight-sprayed a brighter shade of silver and then the bright brass was achieved with washes and a very careful highlight drybrush and some edging. Various elements of the dreadnought’s “skeleton” were subtly shaded with a blue tone, while others were done with brown, or only with black. Red was the only accent colour used, aside from green on the lenses and bone scrolls.

While I considered using some additional colour, or adding something to the left shoulder-front, I didn’t want to get too carried away as I feel that the Minotaurs should feel quite Spartan. (Pun intended, obviously!) The whole thing was finished with a satin varnish rather than the usual matte since I wanted to retain some of the soft shine that the model had when the paint was done. I’ll need to matte in the drilled-out holes of the multi-melta barrels, though.

Coming up with appropriate text for the small scrolls was annoying. A simple reference to Minos which has just got to be the name of a world they recruit from, or at least a key vessel in their warfleet. Aeres of course is the name of the warrior entombed in this Dreadnought. Chosen because it sounds good, fits nicely in the small frame of the scroll, because I could paint it decently enough, and probably because I was listening to a podcast talking about Austin Aries the other day when I was working on the dread.

Finally, a shot of Aeres alongside a few of his battle-brothers. May their enemies quake in fear!