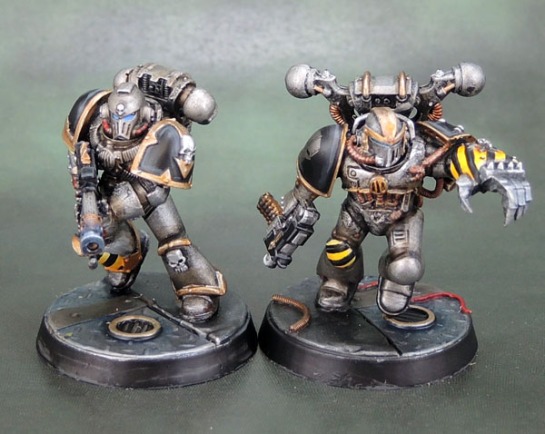 For the penultimate post in this little series on my “Legacy” Iron Warriors, we have a pair of models rebuilt from what was a single model. Originally, Berserker legs, Iron Hands chest, Iron Warriors Head, along with the flamer, the attached arms and shoulders and the chaos backpack. When getting the model ready to complete, I noticed the somewhat unique Iron Hands chest was almost completely hidden from view by the flamer and the arms wielding it. I felt that was a shame, and broke apart the model, finding another marine’s worth of part-bitz to make the previous Iron Warrior into two, one with the flamer as before and one that would show off the IH chest plate.

I think the use of a BaC MKIV helmet adds a lot to this figure. It helps to tie him in much more with the Heresy, and with these Iron Warriors being Veterans of the Long War. It will also help to tie him and by virtue, the rest of his squad in with any subsequent Iron Warriors I build as they will include parts from close to a decade of intermittent Forge World orders, not to mention Calth and Prospero. 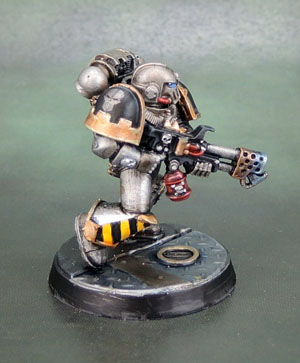 The crenellated shoulder pad is a metal Iron Hands one, with the IH badge filed off. The flamer is a metal chaos one, from that era when so many kits were simply plastic + metal add-ons. A shame the basic CSM kit is still the same one. Speaking of the same kit, the legs here are from the Khorne Berserkers. 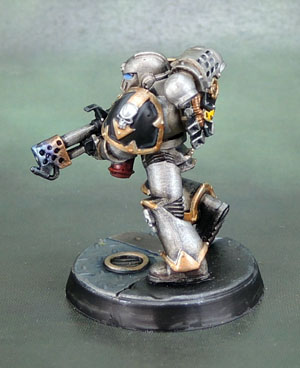 Left shoulder is a plastic CSM pad, and the skull in it’s midst works as a second Chapter Icon, as does the one on his kneepad. It’s a relatively simple model, but I really do like it myself. I kept the charging pose, and the addition of the MKIV head (and pack) really works for me personally.

The other half of the original model has been elevated to an Aspiring Champion – unless I use these older, individually converted models as Chosen, in which case he’d be a Chosen Champion. A pair of running Assault Marine legs from the Blood Angels I got from Nerdfest had some glue residue left on the upper thigh which worked for me as subtle battle damage – slightly warped metal. Damaged but serviceable. 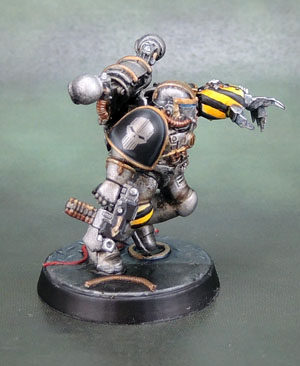 Both shoulder pads came from the MKIV Calth marines. The shoulder studs also work as a callback to the original RT marines, so I naturally went with the old-school combo of chapter badge right, studs left. I also added some guitar wire cabling to his power fist arm.

Hopefully the motion of the figure, plus the rigidity of the ammo belt link explains the orientation of the bolt pistol’s ammo belt. (Belt-fed pistols? /facepalm). I’ve also just noticed that brown spot on his left calf greave. Rest assured that he’s now safely back on my paint desk to have that touched up.

9 thoughts on “The Week of Iron: Part Three”