Can you say 2nd Edition with me? Can you say 1990’s? Can you say mining old posts for recycled content? *cough* Well, actually I’ve still got plenty of new stuff ready to show after I pull the photos from the camera, and go through the resize-and-crop process, but I was looking at the Detolf I have in the room where I do my painting and spotted this guy – and realised that the last (and only) time I showed this figure was 7 years ago, when I made a total of 9 posts and had fewer viewers for the year than I have in 2 weeks today. So… not many people will have seen this one, comparatively.

This fine fellow is (was) a Slaaneshi/Emperor’s Children Champion. Converted many years ago for me by Dave M. The base is a Kharn the Betrayer body, with a 2nd-gen Daemonette claw (the only thing that range of Daemonettes were good for, in my opinion), a head from same and a RT-era Chaos Terminator weapon arm – the original Chaos Autocannon – which looked similar enough to one of the 2nd-Gen Sonic Blasters once the chaos skull shoulder pad was glued onto the base of it – from back when such things could be taken by Slaaneshi Champions. Backpack is from the metal Ahriman of the day.

In current terms, he’d probably be a Chaos Lord, Mark of Slaanesh, Shriekwave or Bolts of Ecstatic Vexation to represent the Sonic Blaster, Power Fist or Lighting Claw for the crab claw… I imagine it’d probably be a terribly inefficient combination, but all I can say to that is Second Edition, Rule of Cool, and Who Cares? 8th Is Almost Upon Us Anyway.

Painted in 2009, when I’d just gotten back into painting miniatures after a bit of a hiatus, these photographs were actually taken back in 2010. The only additon since then being a tuft of grass and a tuft of flowers – things not easily accessible back in the day. I certainly didn’t have any, anyway! 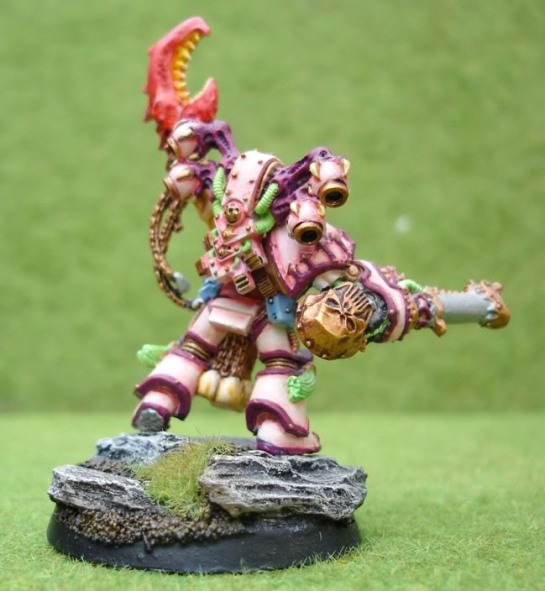 Looking back at this figure now, I feel like I might have overdone the pastel colours – I’d skip the baby blue and the pale green tassels. By the same token, I’m happy enough with the paintwork on this figure and… I guess respect it enough to feel no need at all to back in and touch it up. I actually added Prince’s “Love Symbol” as the shoulder badge, though it can’t be seen here. I thought it looked quite cool and felt the Androgynous nature of the symbol to be appropriate for this particular champion of Slaanesh. I’ll take a pic later and edit it in (it’s 7am and rainy here atm!)

Anyway – I hope you enjoyed this blast from my past!

14 thoughts on “Blast from the Past: Noise Marine Emperor’s Children Chaos Lord”