Ok, now I’m feeling (mostly) better and the insano-weeks of work are over, it’s time for me to try and get this shitshow back up and running. We’ll start by posting up the remainder of November’s painting in the next few days, then I’ll do my round-up, then the community round-up, then I’ll start posting my December stuff. So be ready for a few days of consecutive posts…

Once again, inspired by Wudugast’s recent painting shenanigans, I pulled my batch of Necromunda Barricades from my pair of Necromunda ’17 sets out of the tub I’d kept them in since clipping, cleaning and spraying them, and set to work.

They were a good project for the past couple of weeks since I’ve been doing a lot of work from home, as they were something I could very easily dip in and out of for the most part, with a kind of staggered-assembly-line mentality, and the use of so many washes and thin layers necessitated frequent breaks from the models. As such, I tried to use them to cleanse my mental palette. 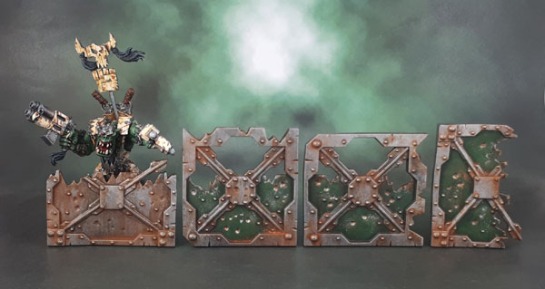 Originally, I’d planned to do them all completely in metallics, and then just weather them up. Then I had the bright idea of painting some of the doors in chipped and worn metal. Then I added another colour to the range of the doors. Then I decided that if I was doing this with the doors, I may as well do the same with the bulkhead barricades (which, incidentally, is the reason I never managed to get a single OriginalNecro Bulkhead painted. I really liked the appearance of the “filled in” ones in WD and rulebook images, but it seemed like WAY too much work back in the day…

So.. yeah. The palette of these grew organically. 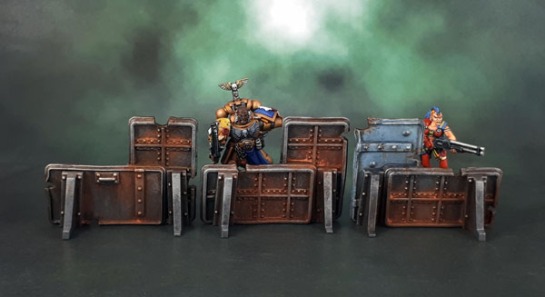 I know that I probably “should” probably paint up the “objectives” half of the set that’s also sold as the Necromunda Barricades and Objectives set, but instead the next thing up on the workbench of this nature will probably be some of the new Speed Freeks Ork-styled Scenery (though it’s pretty nicely generic for post-apoc and hive world environments as well!) Then perhaps some more bulkheads. I’ve already clipped the ones off of the Rogue Trader Sprues…

And finally, another thanks to Wudugast. These got started (and even finished) painted because of your post!