Recently, I was reading one of Alex’ posts over at Leadbaloony where he noted that he was going to try and paint up something for Deadcember. (Though nothing in months for these challenges anymore.. sniff 😢). Anyway, I decided to see what Deadcember actually was. Or is. I mean, I can guess, but it’s always good to have a proper look around. It seems to be predominantly a weightlifting thing, where weight enthusiasts do a lot of deadlifting …but a few google ranks down, also a painting challenge that has run for several years, though I couldn’t really find a central “hub” for it, despite a few blogs participating over the last couple of years along with mentions/threads over on Lead Adventure and the Oldhammer forums.

So simple then, from what I saw. Paint some undead. As it happened most conveniently, I had this skellington on my desk. Known as “Hellblade”, and originally one of the five interchangeable crew from the classic metal Undead Chariot. He had been sitting around, part painted and unloved for some time. Years in fact. I know I rebased him a few years ago, and there had been some repainting involved. So yesterday I re-repainted his bone cloaks into the red of the current Undead Army, did all of the necessary highlighting to his bones and black robes, and then hit the shield with some freehanding, and he was done. So after an hour or two, easy as that, a model that had sat around ignored for literally years was done. This is why I started doing these challenges, and also why I’ll try to tack on anyone else’s challenges that I happen to see that aren’t those “start-to-finish” ones that just leave me with more half-painted figures. 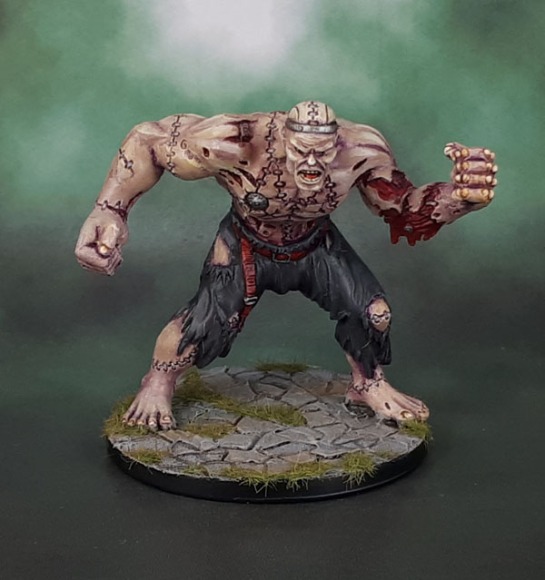 So, with Mister Hellblade the Skellington done, I looked around the table for something else that was achievable. The Flesh Golem was there. That bloody Flesh Golem from the Castle Ravenloft D&D boardgame that Marouda, Pyro and Orez played through back in 2012-3 or so, which is why I’ve (badly) sculpted flagstones onto his base. Yeah, he’s been sitting around for a long time, too. Mediocre story short, I also knuckled down and got him completed as well. Done.

This isn’t the last of 2018’s models to show. There’s still a couple more to go, but they shall have to hit the page in the opening days of next year!

And on that note, as it’s getting to the business end of New Year’s Evening here, I wish you all the best for the remains of 2018, and the best for 2019. I’ll see you on the other side!