Rather than the usual photos of figures finished recently, finished ages ago or WIP, I thought I’d write up another of my infrequent discussion posts this time. The topic being that of painting models at work. It’s somewhat inspired by Game of Travel’s posts that I’ve been reading for awhile, and specifically his post of May 4th about the Portable Painting Station that he took with him around the world. It is also very much inspired by a random thought I had a few months ago this year, when I realised I could try painting at work, and figured out how to give it a go.

All set up for 20 minutes of painting time at work.

The problem is of course that work is tiring and draining. On Monday I might do a little bit of painting after work, but mostly simple “monkey work” things like basing or base coating. By Tuesday it’s even less likely, and after that, I’m a write-off. When the weekend comes, I start very slowly, and it takes until Sunday afternoon to really get firing on all cylinders – at which point I have to get ready for work on Monday and it all starts again. I had the thought that if I could keep my hand in during the working week I could keep myself somewhat in the paint-mentality, and so on the weekend I don’t need to “restart” again from scratch. And hey – it’s worked. It also gives me a little while where I can zone out and just quietly paint, which I imagine is for me a little like how people who meditate for relaxation feel. 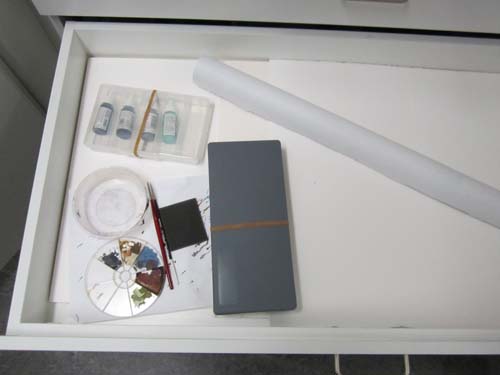 The Drawer where I park my paint and Chessex Case at 8am each morning.

At work, I get two breaks per day. The first is 15mins, and the second is 30mins. That’s all of the time I’ve got to walk across the site to the break room (which is a couple of mins in itself), go to the toilet, grab a coffee and make it back. So really, once I’ve done that I’ve only got about 3-7 mins at best to drink my coffee during the 15mins of my “morning tea” break. Lunch is a bit longer, and while the transit times across the site are the same I can often scoff my sandwich just before or just after break, while actively working (being in the right place on time is the priority in my workplace). This means I’ve got about 20mins where I can get some (painting) work done (before I need to pack up!)

Since stuff is still always happening in my workspace, I’ve located a quiet room near the breakroom where I’ve been able to leave a few things stashed in a drawer with the permission of the person who “owns” that room. So in a drawer, I keep a piece of A4 paper that I use as a painting blotter (as at home), a CDR spindle-thing that I use as a palette (the same as the ones I use at home), a piece of blister foam and 2 brushes. I bring in my project of the week inside a small Chessex Case, and my paints inside one of two plastic containers. 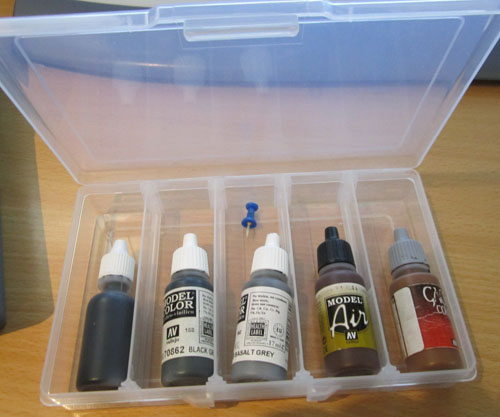 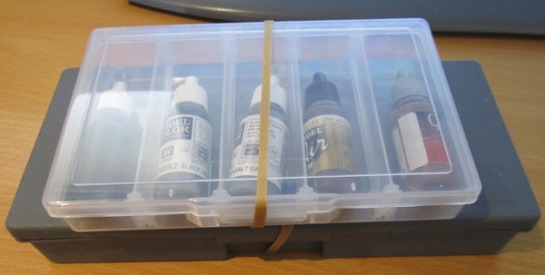 I prefer to take the smaller of the two, as it makes me really think about my choice of palette for the models I’ll be painting. Since I’m only going to get in 20 minutes of work in on any given day, too many colours or figures is going to be useless, so I need to really focus on what I’m going to get done. Having several models with similar or the same “thing” that needs doing is best, so I can work in a production line style. With the paints above, I’ll be able to shade their robes, and get the boots basecoated. Once the various elements are done, I can swap colours out as needed – to highlight/shade colours for the boots for example. 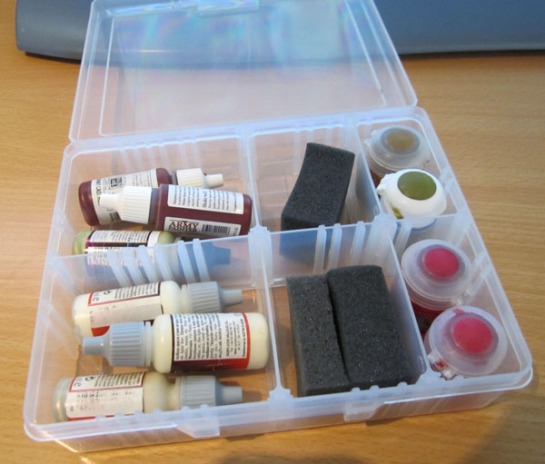 The larger container, with 4 of my go-to Citadel Colours.

And safely packed for work.

Sometimes though, my paints of choice for the day include some Citadel Colour paints. While most of my paints these days are from the Vallejo lines, with a smattering of Army Painter and Coat’D’Arms and so on, I still use Citadel paints, and several of the new range are still my go-to colours and paints for those tones. I prefer the smaller plastic container, but the Citadel Colours don’t fit into it, and the larger one can be reconfigured to take 9 Vallejo paints, or 6 Citadels.

And ready for my bag.

So basically, it’s a pretty simple thing to do, but I find it keeps me “in the game” all week, and then it’s much easier to keep painting on the weekends. I still chat and socialise with my workmates and colleagues in the morning before we’re on the clock, during tea break and  in the afternoon so it’s not like it turns me into an anti-social grognard. I’ve also found that it’s especially good for getting those tedious jobs done. At home I might sit and stare at something like highlighting the black skirts on Gondor infantry for 5 minutes, and then paint something else, or go look at the internet, or turn on the game console or even just keep staring at them. At work, well, I’ve got 10 figures, 5 paints and 20 minutes – no time to waste! And any painting is better than no painting, so the result is that tedious jobs actually become enjoyable.

7 thoughts on “Getting Painting Work done at Work.”