So the last couple of weeks has been exceedingly unpleasant, with one of the least pleasant aspects of life making a sudden and unwelcome appearance. I stopped painting for a little while, but wanting to get back to normal, I’ve started again. The first figures I painted haven’t been varnished yet, so I’ll show them in a week or so. In the meantime, my group got together a few days ago and gave Fortune and Glory, an Indiana Jones-styled boardgame set in the late 1930’s a go. We just used the basic rules, since we were learning them. 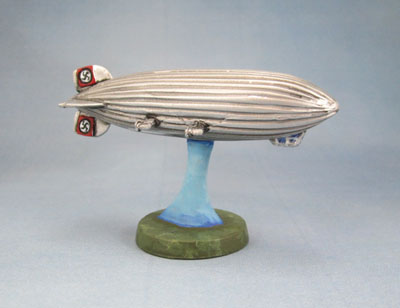 The basic rules don’t actually use Villain characters – or more relevently to this post – the Nazi Zeppelin or the Aztec-styled pyramids. However, when we were packing up after midnight – after having the win stolen from me by Marouda, and then from her by Orez – I noticed that some of the little model-tokens would paint up exceedingly easily. So I made that a mini-project to knock over quickly.

Reverse shot of the Zep. Now add your Page/Plant jokes.

The Zeppelin actually has those little swastikas sculpted into the tail fins. Not that I’m squeamish about that sort of thing, as I play historical games, do a bit of historical study and have a pretty clear understanding on who the “bad guys” were. One day I’ll actually get some Bolt Action Germans painted up as well. The Zep isn’t an amazing model – it’s very much a boardgame piece. I had a little bit of a play with the base and flying stem to give an impression of terrain and sky, but I’m not going to knock myself out turning out a piece of art. Likewise with the highlighting and shading on the Aztec temples.

The mesoamerican pyramids got painted in a sandstone-ish style. Not necessarily entirely accurate, though in some photos on Google Image Search they can indeed look like this – but mainly because a bit of colour looks better for game pieces. – And because they can be placed anywhere in the world – look at that one! It’s in Egypt!

A promotional still from Fortune and Glory – The Colourised Adventures.

And here is how they might look when being played. I’ve given them a solid coat of gloss varnish, followed up by matte. There’s a bunch of Nazi and Mobster models as well. I’ll probably paint the Nazis as SA brownshirts rather than as DAK, and the mobsters in simple black “mobster suits”. I imagine that both would be pretty simple to do, but I’ll get to them later. Probably.

12 thoughts on “Small Fortune and a Little bit of Glory”