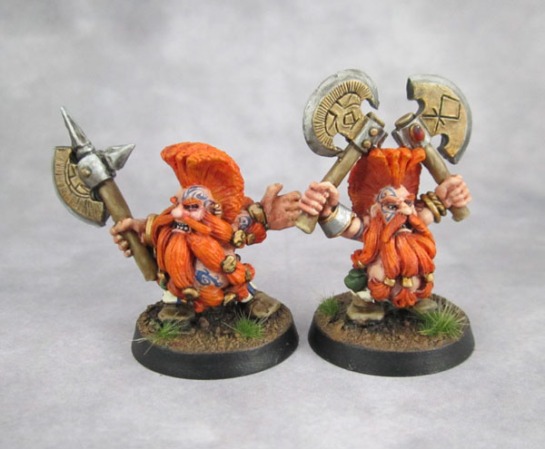 The first two of the new batch of Slayers.

While wandering around the house the other week while on the phone with my sister, I spotted a few Dwarven Slayer figures on a bookshelf, primed black as I’d gotten them from eBay and left them there a year or more ago. I had one of those “Huh, maybe I’ll paint these.” thoughts as I picked them up and looked at them, moving them to the painting desk. I hadn’t painted for a while, and just couldn’t stomach working on the Zombies that I showed last update. Looking at them, I figured that they’re mostly beards and flesh and axes, so not too hard – and most importantly, were something quite different to both the Undead and Gondor that I’ve been painting since January or February when I started the current painting challenge.

I got the first guy done – the one on the left with a single axe and open palm, and to be honest, I really enjoyed painting him so I pushed on and finished his mate. I then realised I hadn’t done done any warpaint/tattoos. I wasn’t sure if I wanted to do them, since I was pretty happy with the figures as-is, but in the end decided to go with it – and so decided to do a bit of a melange of Celtic/Maori/Polynesian/90’s-style “tribal”. Mostly because “Braveheart”*-style woad is too easy/boring for models like these. 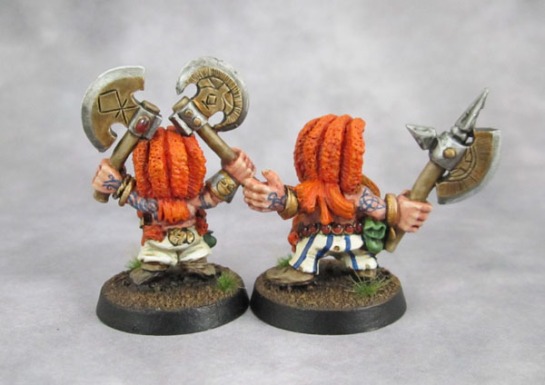 After painting the tattoos in with dark blue, I glazed over them with the paint base coat – a very old Dwarf Flesh (hex-style pots with white lids) to give that “tattoos under the skin” look. The bright orangey red is a little more muted than these photos indicate, but they’re still very bright. I considered adding some stubble at the shaved points of their heads, but went instead with a clean look under the tattooed skin. Besides, people who shave their heads regularly end up with normal-looking skin in that space anyway. 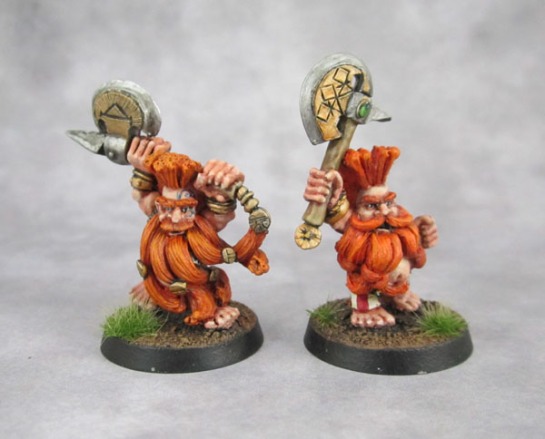 The second pair of Giant Slayers.

These models date from the 4th-5th edition period of WHFB. So after I’d stopped playing. They’re actually “Giant Slayers” – so from that point in time when GW decided to split them off from regular old Troll Slayers, and did so by giving them bigger hair, as opposed to “simple” old giant mohawks. Hence the 4-lane mohawks these guys have. To be quite honest, I never really liked these models. I wasn’t a big fan of the Marauder ones that pre-dated them either – really only being a fan of specific models in the range (like this guy) and of course, the original sometimes-norse dwarf berserkers from WHFB and before – sadly, I only have the one. As it happens, and just as with Denethor (who I finished after these guys) – after painting them, I’m now quite fond of them. 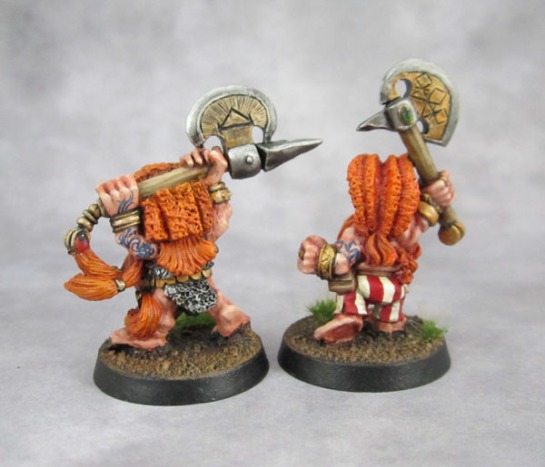 Rear view of the second two.

Despite all this, I picked these up a couple of years ago to paint one day for my Dwarven KoW army. Which I guess I’ve now started in some form – at least for a small, legal “ally” sized force. I’ve got some ideas for these guys once they become a unit, but I’ll talk about that later. I picked up a ton of plastics from a mate in Tasmania last year for this army, so they’ll finally be getting some love after I get more of these orange-haired guys done. Probably.

My “modern” slayers so far, all together.

This pic perfectly demonstrates what happens when figures from a similar range are painted in different batches. Beard-shade variance!

Aside from that, they’re painted in a style evocative of the White Dwarf magazines from the period of when they were released, rather than especially realistically. Bright orangey-reddish hair and beards, clean, stripey trousers, dark blue tattoos. Let’s face it, these models are far from realistic in their proportions or gear. I’ve always appreciated the Perry’s style of dwarves, which these and pretty much all GW and GW-alike dwarves followed in – but the proportions are horribly deformed compared to anything realistic. I figure I’m happy to just embrace it!

Besides, it’s not like GW has moved on from the 90’s Dwarf Ethos, either. If anything they’ve just gone further over the top…

*Yeah, I know Braveheart is an absolute mess of historical anachronism – but everyone knows what Mel Gibson looks like with half a blue face, so it’s an effective visual reference point.