I’ve painted up a couple of units of “Fir Bolg” Skeletons from Brigade Models now, and this makes the third. Or the fourth, depending on whether I count those spearmen as one or two units, as they can make for either a Horde or two Regiments. I know I’ve got another 16 archers (two troops of 8) to paint as well, so once I clean up my desk in the next week, I’ll spend some time cleaning the archers up and then hit them with the spray can. This time, we’ve got Skeletons with Sickles.

Staying with the same colour scheme I’ve used on their predecessors and in keeping with the rest of the army – Red and Black, Iron and Brass, Rust and Verdigris, Cadmium-Red wood – and Bone. The tabards and cloth this time have been given a Par Chevron in red and black. 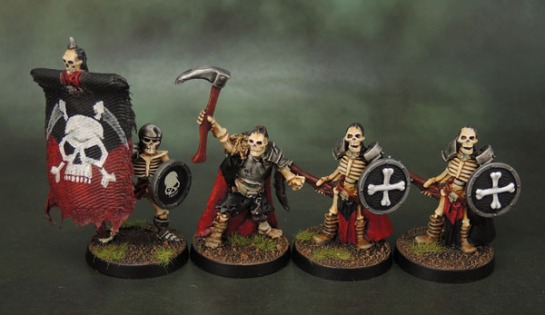 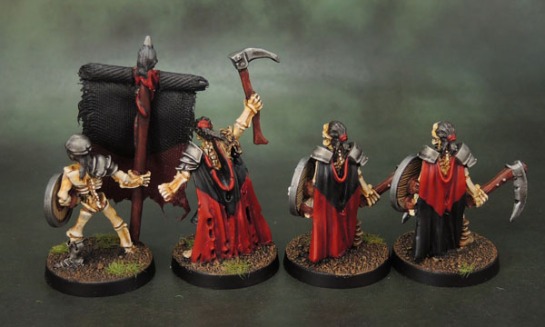 The standard came from one of the other Fir Bolg skeleton sets, and working out how I’d create the banner took a bit of time. Eventually I settled on a cloth banner, cut from the material taken from an old pair of shorts and fixed with PVA. The Hero is actually their Skeleton Leader with Axe model, with the axe cut and trimmed into a sickle of sorts. I painted the second of the two champions with the same Par Chevron, though reversed. I’d like to move him to a different unit down the line, and perhaps replace with a drummer, but another £3.50 for a drummer feels a little steep when the champion – a mod of the same base figure plus two troopers runs £4.00 by comparison. I dunno. I’ll figure it out later. I’d originally planned on giving the two champions different shields as well, but when it came time to complete the command figures, I realised that the shield I’d initially selected would not have looked good angled at 90 degrees, and by then I had already ended up using the last “horned skull” shield on one of the troopers, and didn’t feel like tearing the superglue-and-greenstuff mod apart. 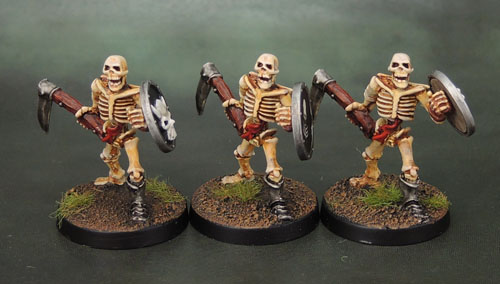 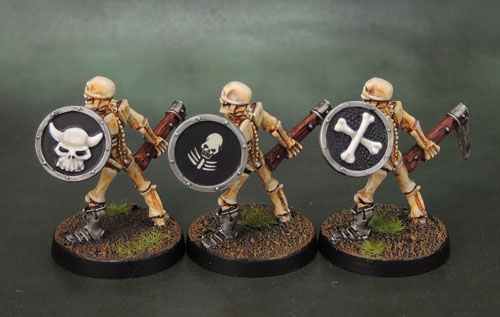 Only two sculpts, unfortunately. I like having one-piece metal sculpts for these models, but I do wish there was a little more variety in the number of sculpts, like there typically was in the Old(Hammer) days. The shields also reveal that rather than having given the models that lack sculpted shields freehand shields, I used some of the old-school, 20-year-old Warhammer Undead shield decals that I found recently. Once again, these guys were painted using the “Warm Bone” method, starting with a cheap cream spray can from the local hardware store – with much of the work done bit by bit during lunch breaks at work. The final work was completed last Monday, so these guys also qualify as my September Undead entry for the Tale of Painters challenge over on Dakka. 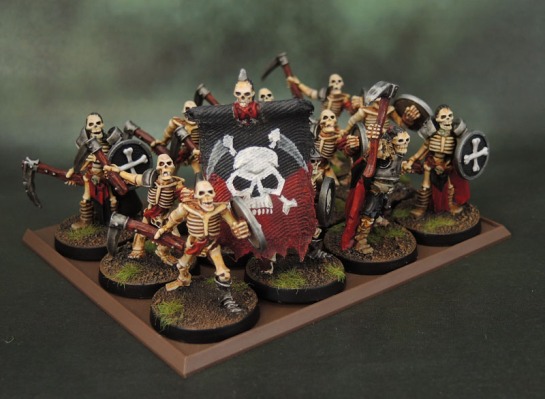 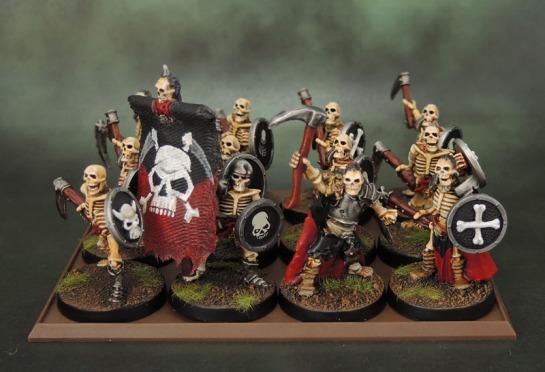 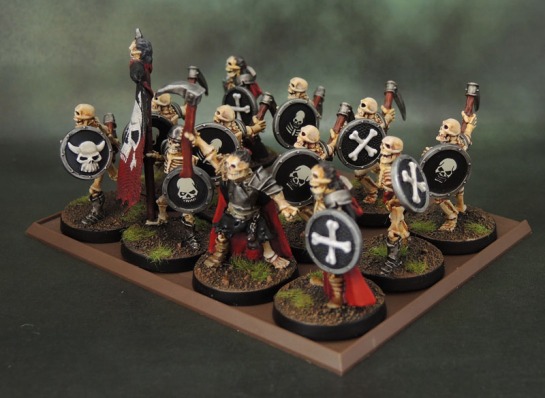 As per usual, the final shots show them off blu-taced down to a regiment base for KoW – which I really need to get around to playing again sometime soon. I’ve not done much tabletop gaming in the last couple of months, as it gets a bit too chilly out in the War Room, and as a result my regular gaming sessions with the group for the past few months have been digital (The Division, Destiny, Dead Island) rather than tabletop-oriented. Hopefully the weather can actually change a little now that Spring is here, and we can get some wargaming and tabletop gaming done again!