These boxes are not on the hillside, nor are they made of ticky-tacky, but they are (almost) all the same.

Ok, this is a scenery post, and a simple one at that, as it deals with a few pieces of minor scatter terrain. A long time ago, I backed Mantic’s Mars Attacks Kickstarter, and amongst all of the stuff that I received (and still haven’t used.. shhh!) was a few sets of the scenery accessories. 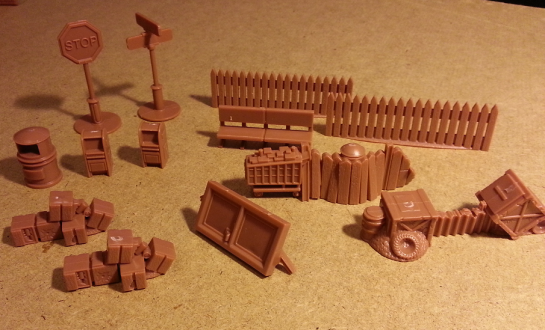 Naturally, I forgot to take a photo of the Accessory pieces before I started on any of this stuff, and Mantic’s photos don’t show them very well. It is in fact a very good gaming set. It turns out that I had four of them. Unless I find another 1 or 2 in boxes someday. I actually started painting the post boxes and rubbish bins back in summer, about 9 months ago, but managed to mess up the salt weathering. So the whole project went into limbo. A few days ago I spotted the box-barricades sitting on my painting desk and so decided to clean them up in a vaguely useful way – by painting them!

So here they are. Exciting, no? I kept them as generic as possible so they can work in as many settings as possible, from historicals through moderns, zombipocalypses and to sci-fi in about 28 to 38,000 years’ time. (When most things are still oddly recognisable when compared to nowadays.)

I also found a couple of resin crates that had been bought in the 90’s and sitting around part-painted for years, and spent the whole of 10 minutes that it took to finish them as well. I have the attention span of a flea, sometimes… I think they’re probably originally from some set by Grendel/Scotia Grendel, since that’s where most of my really old resin junk originates from.

Finally, some Zombipocalypse survivors, Space Marines and Dwarves help out with showing the scale and how they fit in decently well with all three disparate types of model. They’re a little on the small side, and while they’ll work well as meeples for barricades in games of Zombicide, they feel a little like those annoying foot-high “walls” that videogames use to keep our otherwise athletic heroes from straying outside of the designated play area… They might work better stacks on top of other items to create useful cover, but even as is they make for decent ground clutter.