“He wondered what the man’s name was and where he came from; and if he was really evil of heart, or what lies or threats had led him on the long march from his home; and if he would not really rather have stayed there in peace…”
Lord of the Rings: The Two Towers Book 4 Ch. 3 “Of Herbs and Stewed Rabbit”

Amongst my many projects that are theoretically on the go at any given time are usually a bunch of “one at a time”-type things, where I have randomly gotten enthusiastic about a model or even a unit from an army that I haven’t really even begun on, and started painting them. These Harad Abrakhân Guard are an example of that. They took me about 6 months, on and off to get painted – mostly because I’m easily distracted and small amounts of indecision on how to paint an accoutrement can result in literally months of delay before getting back to a model.

The colour scheme was pretty simple. I wanted to avoid the purple and turquoise seen in GW’s scheme entirely, and instead go for black with a splash of bright red on the sash. I think black keffiyeh/shemaghs always look sharp, so again, that was a no-brainer for me. A bit of gold retained for bling, and the clothing looks pretty good. I painted the flesh tones in a light brown tone, similar to people of Lebanese and Jordanian descent that I work with, since unlike GW until just a couple of years ago, I don’t think everyone in the world has caucasian skin pigmentation. My Tallarn (if I ever finish them) have similar skin colouration to my Haradrim. (I get the TE Lawrence/SAS reference, but I prefer the Bedouin one for them.) 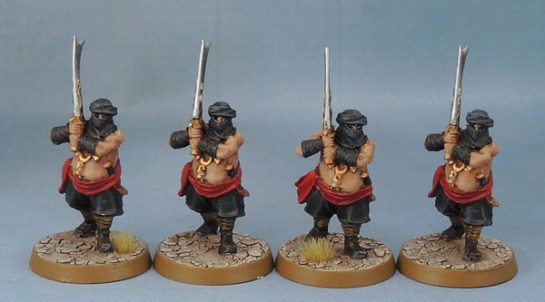 As with a lot of the LotR metal range, these figures do suffer a bit from GW’s “three poses only!” policy, but mixed together in a unit they still manage to look decent.

Finally, the Kings of War-oriented unit shots. Until I get a lot more Haradrim painted – which won’t be anytime soon – these guys will get shoved into one KoW force or another as a unit of some sort of elite humans who hit hard but have light armour. I may also be able to use them as proxies for something in games of SAGA – Crescent and the Cross. Honestly, I haven’t looked hard at that since I’ve got very little Crusade-Era stuff painted right now.

But hey – these guys are done, and I think they turned out pretty well, so it’s all good!