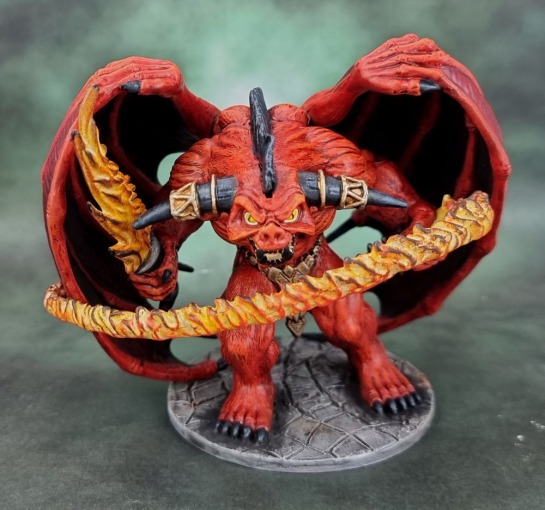 Back to the D&D stuff for this post – this time it’s the Big Bad from the Legend of Drizzt D&D Adventure Boardgame. Errtu, the Balor. A Balor of course, is a supernatural being from Irish Mythology.  In D&D of course, a Balor is pretty clearly their non-copyrightable version of Tolkien’s Balrog. Just as an aside, Warhammer’s Balrog archetype evolved into the Bloodthirster of Khorne, which also follows the same visual archetype.

This one has been sitting around on my painting desk for a long time as well – a simple model that I hadn’t been especially inspired to work on, but admittedly, without the distate that I hold for the previous model from yesterday’s post. Over a couple of months, I did two or four sessions to add in the putty for the flagstones on the floor, and with Monster MAYhem, over at Dead Dick’s Tavern and Temporary Lodging happening this month (and not having gotten to it during Monster March) the challenge gave me the nessecary kick up the arse, I got cracking on it. 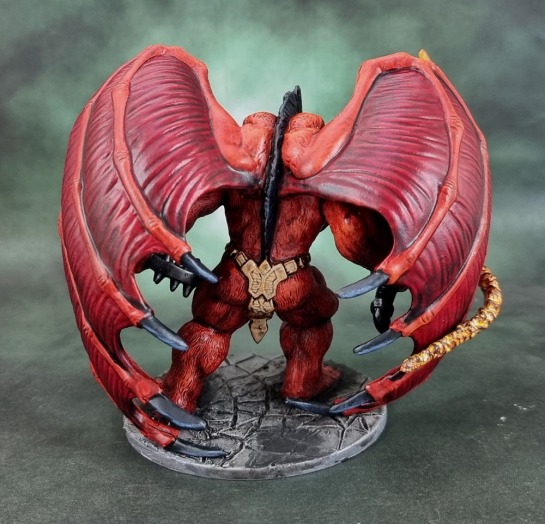 I clipped the flame-whip from its anchored spot on the model, and had some trouble with the wings not wanting to stay set in a more open position, but both look okay at least. lot of Contrast paint here, though layered and with various highlighting and so forth over the top, as well as a reasonably simple flame effect on both the whip and sword. 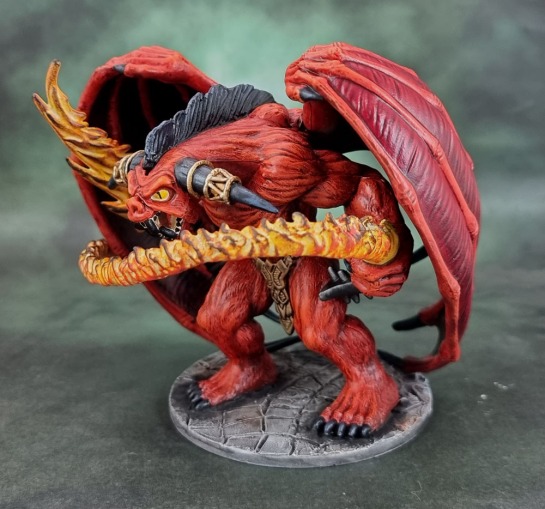 I also added some weathering powder to the ground, to give a scorched look to where the Balor has walked and stands. I now see a little reddish spot on the base there that I’ll have to get to and remove.

And now I’ve got the big bad from the third D&D Board Game done – there’s a few regular villain and monster models left to go, but once they’re done I’ll have the third set of these models complete, which will be nice.

And here, a group of adventurers help provide a scale shot for the big boy.