Two more Zombicide survivors again today. We’ve started playing through the Zombicide Campaign again a week or so ago, but with a few of the additions added in from the start, and a new rule applied to the survivors – our characters will be randomly drawn from the painted survivors only! This is to help give a little bit of extra motivation towards getting them painted, especially since there are so damn many of them to work through. Both of today’s heroes are CMoN Originals, more or less – so no actors or celebrity likenesses this time. Well, not exactly… 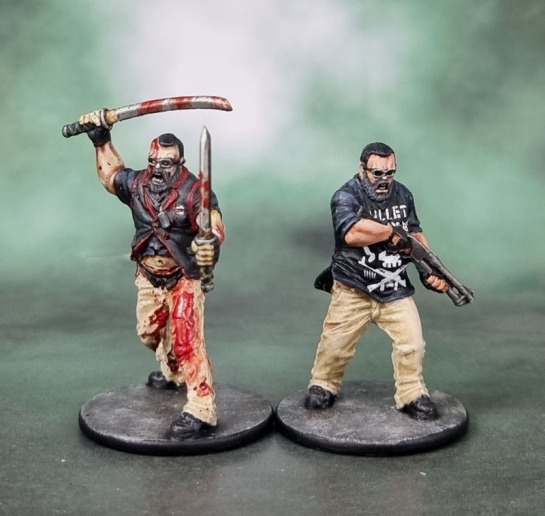 The first survivor – Joshua – was a Kickstarter backer who paid a LOT of money in one of the campaigns to have himself included as a playable character via the “I AM LEGEND” pledge level. The thing is that the model actually resembles how I used to look a few years ago before I started working out (and also lost a pile of weight). So I painted the model dressed more or less in an outfit I would wear. It’s old me, Zombicide version~!

Joshua even wears something resembling my old vest, so I had to add that in! Of course, the main reason I’m ok to mention what I (used to) look like is because I don’t look like that anymore! 😉

Raoul here is also a Zombicide “I AM LEGEND” backer, and so with the same amout of deference I gave Joshua, I turned this guy into a redhead. Or a ginger, if you prefer. The sculpt just “felt” like he should be an angry white guy with ginger hair! In the game, he’s got a bunch of medic-based skills, as well as a clearly-marked first aid pouch on his vest, which is shown as a coyote tan one in the artwork, so I guess that implies that he’s a Navy Corpsman, so good on old Raoul. And he’ll hopefully be useful when we draw him for our games as well!

“Zombvivor” figures aside, both of these guys make good armed civilians for a variety of modern games, as well as the obvious use for post-apoc and other zombie-themed settings. With this foursome, I’m getting towards the end of my submissions for Ann’s second annual “Paint the Crap You Already Own!” challenge. Only two more posts to go! …..I think.