These ten M4 Sherman models are some of Battlefront’s early product – resin shermans with metal guns. I picked up these two platoons secondhand, and so they lack turret MGs (if these early models even had those). I picked these up as two sets of 5 tanks for £15.00 each back in 2012 – they were old and long OOP even then.

And that’s where this story ended. Or took a rather long intermission until very recently. While I was looking for something else, and had Marouda helping me look through the boxes and tubs of figures in storage, I spied the two sets of Shermans, and then decided to pull them from the shelf, and also grabbed out all the plastic Open Fire! Shermans as well (sadly, they’re the dodgy ones from the first edition of OF!) Thanks to Just Needs Varnish, and his endless stream of cool looking 15mm stuff, I decided it was time to get a few little tanks painted up.

They’re really nothing special. I got two versions of OD spray made up at the local paint store (I’ll need to get a Brown Violet match made as well, but I need to get the Vallejo paint first!). I used the darker as the base, then the lighter as a zenithal shade. I used the Battlefront decals (they’re fucking awful to use – they take forever to lift off the sheet, they’re thin and crinkle and tear easily) as I couldn’t get the PSC ones. I can out of Allied Stars and so found a larger-scale sheet of them from Warlord, and used the smallest ones. I’ll have to buy a bunch more of the Warlord ones, as they were great decals to use.

The ten Shermans have been painted in a rather generic style. I’ve gone for all-Allied Stars to save the ringed stars for later units. I figure I can use the turrets with top-stars on them as Platoon leaders as needed. Not that I’ve played Flames of War in many, many years now. Not since 1st edition, in fact. While I can recognise a lot of WWII armour in it’s basic forms, I don’t know them well enough to know where exactly to place all of the optional markings, or which of the many variants that these Shermans are.

Battlefront Shermans imitate the start of a typical round of World of Tanks.

What will I do with these? Well, I have a few different 15mm armies worth of figures and armour to build and play with one day. There’s obviously Flames of War out there, and plenty of other WW2 rulesets besides for that scale. At one stage I hoped to play Bolt Action with a bunch of 15mm models, using cm for inches, but it never happened. I have a DAK army that’s been in storage for well over a decade now that could probably be a project for both “Finishing Units” months as well as, obviously, Neglected Models. The problem for me is painting 15mm troops. Because as cool as they can look when complete, I find them painfully boring to paint. 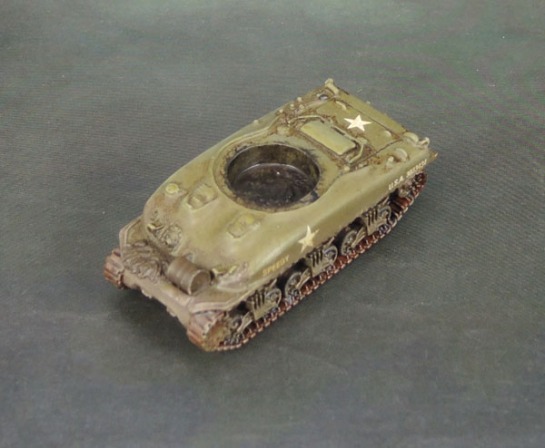 I’ve been considering picking up that TANKS! game by GF9 as a bit of a light game. It would certainly give me an outlet to use some of these tanks with, not to mention potentially giving me some motivation to paint some additional 15mm armour. I suppose there’s also the Bolt Action side-game, Tank War.