I managed to get a second model completed to show today, so this post is a two-fer instead of a single. Not super surprising really, as they’re both pretty simple Dinosaur models from Reaper’s Bones Black Line and so are very straightforward to paint up – the Carnotaurus and Hornslasher – both of which I’m again submitting for the Monster MAYhem, painting challenge.

Bones black has the same detail issue that most of these cheap PVC models have, in that fine detail isn’t friends with it. On the other hand, paint actually adheres to it, and it doesn’t become horrible and sticky, nor does it require arcane combinaitons of paints and special lotions to prime the stuff. So, you know, I can live with it – even if it does mean you want to avoid looking too closely at things like talons and claws!

I got the Carnotaurus cleaned up and based alongside the Raptors the other day, and then while working on other models took a few days to work out which would be green and which would be a warm brown. They’re based in the same manner, so they can both menace Chainsaw Lass or whoever else is on the table – and possibly even the Uncanny X-Men one day in the Savage Land? 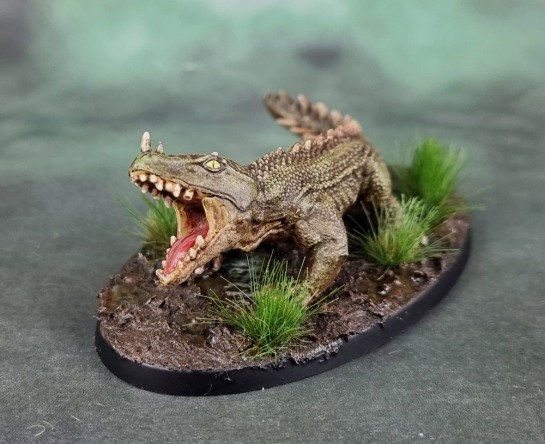 The model I got done today is this thing – “Hornslasher”, which has a bit of a look of a sail-less Dimetrodon. I decided to paint it up as a proto-croc (I know it doesn’t look like any of the actual proto-crocs, but, y’know, sue me!)

I mostly did it so I could put it on the same style of base as the Dire Croc from the other day, so I’ve got another model ready to go for swampy encounters. I painted this one in lighter shades of green and tan, and also gave this one a “dirt” wash of weathering powder using Pledge One Go (AKA Future Floor Wax). I feel like this one – as my “second go” actually has more accurate croc colours than the Dire Crocodile, though I probably should have used the same mix of light and dark powders. This technique practise and reflection of course is one of the biggest values and most useful aspects of models like these.

Here’s the two swampy, bitey bois together, once again featuring Chainsaw Lass for scale. You can also see that I gave the croc’s mouth a bit of a repaint from the super-bright red that it had earlier. I do think it looks nicer now.

(Hopefully) more monsters tomorrow! I’ve got a half-dozen different models that I might be able to get finished by the last of the month…