After what was supposed to be a extra-restful recharge-friendly week, with a long weekend turned out to be an exceptionally brutal one instead, I’ve not gotten as much painted as I’d hoped. Funny dat. Anyway. I did manage to finish something in that time, and that was a trio of Monsters from the Lord of the Rings: Journeys in Middle-Earth board game, this time from the “Shadowed Paths” expansion. The Nameless Things. 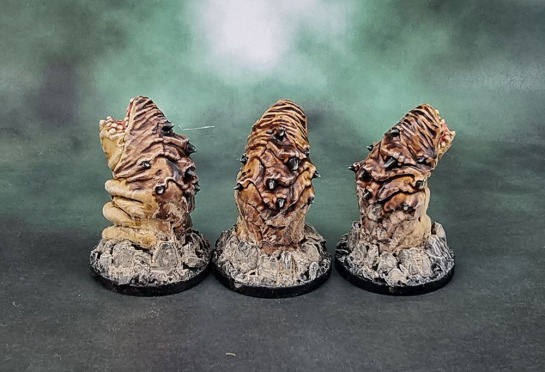 Many have speculated over many years on what Tolkien might have meant or wanted to insinuate with his writings on the Nameless Things – and which “named” creatures might be amongst their number, like The Watcher in the Water, or Ungoliant. Luckily, Fantasy Flight has come to all our aid and filled in the blank for us. Question answered, everybody. You can go home now. They’re ground-worm-grub-things. Like in that movie, Tremors.

Here’s some I prepared earlier this week. I didn’t go full maggot with their paint, and instead tried to make them look a little more like something that could feasably exist, with the digging and the dirt… so at this point I’m not sure if these are 28mm models, or if they’re supposed to be gigantic like Dune’s sandworms and are just downscaled like those Siege Engines I got posted up in the last post. As such, once again I’m not entirely sure if they fit the criteria for Swordmaster’s Monster March Painting Challenge, but I’ll throw their little top hats into the ring anyway and see what he says.