This figure was painted late last year, for another charity auction at work. Much the same as the original Savage Orc from the first few posts, in fact. This time, instead of forgetting to take a few nice photos of the finished product, I forgot to take WIP pictures until almost the end of the process, so there was little point in showing them here.

For this charity figure, I chose Theoden on foot from the Citadel Lord of the Rings range. I chose Theoden for a couple of reasons – those being that he’s a very nice model, has a nice pose, is a somewhat recognisable character, and because I’d ended up with a spare of the figure (which always helps!) This figure is of course, a metal version, and from before they bundled it together with a non-matching sculpt. 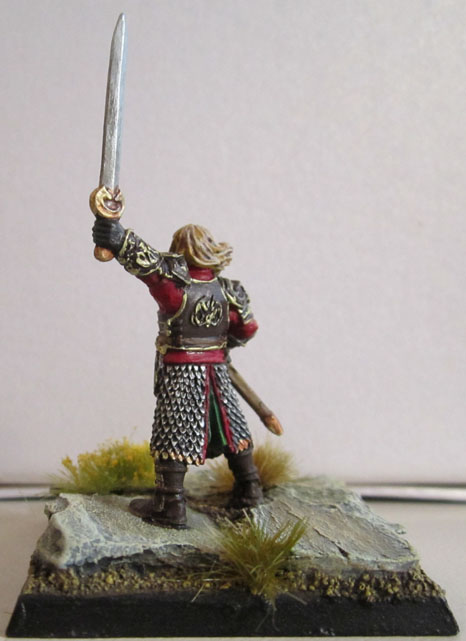 When I started preparing the figure, I found that the truescale nature of it was just going to be far too small for an item in a charity auction. A 25mm round base is fine for gaming, but not quite as exciting for a model purely destined for display. As I don’t have any of those huge and imposing Scibor bases, and didn’t want the base to overwhelm the tiny figure anyway, I went for something a bit larger than the figure, but not big enough to distract.

I chose a 40mm “slate” base from Back-to-Base-IX and added some static grass clumps and flowers from Army Painter’s range. I know my mate Cash loves the clumps, referring to them as “sea urchins” and while I can somewhat see where he’s coming from, I like them for larger bases as they give a bit more depth than regular static grass (or indeed, a Reaper “broccoli” base).

I only found these photos on my camera yesterday. I’d actually thought they were already up here on the Blog, but when I did a search for “Theoden”, nada turned up. I suppose I painted the figure around the time I was getting prepared and packed up to move, so after getting the model done it was back to work and packing and such at the time.

Anyway, done now and months ago sold and given to it’s new owner. Painting the figure was quite the enjoyable process, made moreso by the fact that it only took a few days from start to finish and that the money was going to a good cause. I hadn’t painted a truescale model for some time, either, and the detail on Theoden was surprisingly fine after being to used to predominantly working on the much broader detailed Heroic Scaled figures for so long.