The next few posts will feature a few callbacks to older figures I’ve painted and shown off here in the past. Don’t worry, there’s a point and context to it all, though.

These were some of the very early figures I got. Bloodletters of Khorne from the original Slaves to Darkness volume of Realm of Chaos. Painted back in the day and touched up several times over the years. Pulled out of a storage case a couple of weeks ago to be rebased and lightly touched up again. 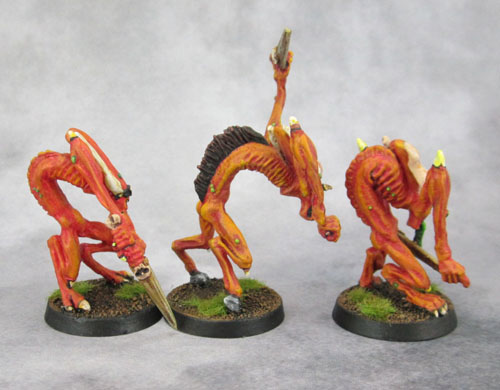 Bloodletters of Khorne in a Conga line.

The middle guy looks a bit odd in the front-on photo, but the profile shot helps him to make more sense. These early figures might not have been the greatest of sculpts, but they had a twisted physiology that made them work really well as Daemons. I’m glad that GW has returned to a design close to the original with the recent plastics after their iterations as cosplaying budybuilders and spiky beastmen in the interim. 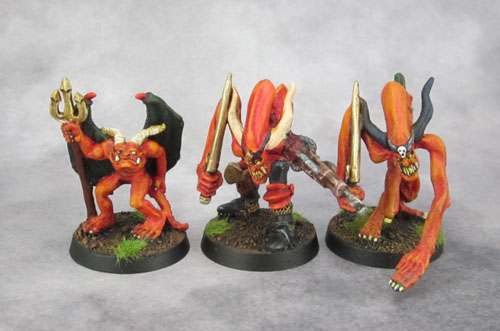 I never had many of the original Bloodletters, and still don’t. Getting them up to an even 8 (or 10, or 12) is “on the list” but they’re not cheap or easily found on eBay. Back in the day, a C18 Night Horror Demon (I guess he could be a gargoyle, but the trident is telling) got roped into the gang and has been a part of the small unit ever since. I somehow ended up with a broken Bloodletter torso, and so ended up grafting it to a spare pair of Chaos Warrior legs I had lying around after an uninspired Bear Centaur conversion. The arm is off an early Jugger rider.

A small warband of Khorne Daemons.

At some point these guys will hit the table again. I’ll use Abyssal rules for KoW, though it’s doubtful that I’ll run a full daemonic army, and instead ally them with “The Herd” (Beastmen) and whatever Non De Plume that Warriors of Chaos end up with. They might be willing to ally with Nurgle, but not with the hated Slannesh or the duplicitous Magicians of Nurgle. I’m sure they’ll also end up on a 40k table, after I get some more forces up to scratch and work out which version or combination of the rules my group will play with.