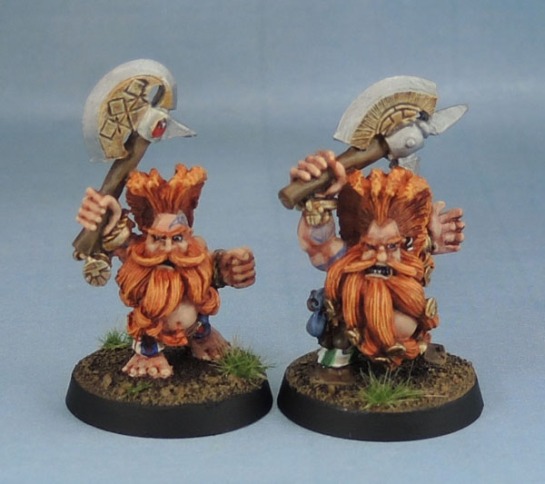 Having finished the last of the Marauder Slayers the other day, we move to another pair of the Citadel Giant Slayers.

This pair has gotten a slightly more natural shade of orange for their hair than many of the others. Whether they used a different dye or theirs has simply washed out somewhat, when mixed into the units, they’ll help to offer some variance while still maintaining the visual coherency with the others.

As with the last half-dozen or so slayers that I’ve finished, I’ve attempted to again vary the stripey trouser just slightly from the neverending run of identical blue stripes. Clearly not by a lot, but again it’s simply about adding a little bit of variation into the unit so they still look like a unit but not entirely homogenised and uniform. They’re not a freshly-raised unit of Napoleonic Chasseurs, after all.

I’m quite pleased with how the tattoos came out on this pair as well. That’s one thing that this project has really helped me with. Well, two. I can now paint many variations of orange-to-ginger hair pretty much with my eyes closed. I’ll have some command guys photographed and posted hopefully within a few days, and then I need to start getting some group shots of the Slayers (and Vikings, and others) taken and posted!

So what does this mean for painting? Well, there are two main roads I can go down. Either I can try to paint better, and spend all my time trying to learn new techniques, increase my skills, and improve all elements of my game. My friend Cash Wiley is one such painter, who has come along incredibly in terms of skill in the last two or so years. However, Cash only finishes a relative few figures per year – albeit to a high standard that is increasing all of the time. My (failed) target last year was 365, and I’m on my second attempt for 365 this year. The other path is that of simply getting shit finished and onto the table. Because you know what? “Good enough” is actually good enough from four feet away when each individual in a block of 10 or 20 or 40 really isn’t all that important and doesn’t need to be anywhere near your best work. I’ve been reading the Bolt Action and Hail Caesar rulebooks over the past few evenings, and almost all of the sumptuous models in those books, in the evocative and atmospheric photos simply don’t pass muster as display models. Yet, ranked up or walking through hedgerows in the close-up photos in those books, they still manage to look fucking amazing.

So what for me? I won a few painting comps in my youth – my best and most amusing being equal first with myself (they couldn’t choose which of my two figures they liked the best) at CanCon back in 1992. I should photograph and post those guys sometime, too. But with father time and my own inevitable demise starting to make themselves felt, I’ve decided that every model can’t be my best model. As readers would have seen with the recent speedpaints of Zombies and, erm, more Zombies, and the Treeman and the Bolt Throwers, I’ve been going for speed lately. I think really though, my path as a painter needs to go down the middle. I need to finish stuff. Now more than ever really, especially with my games table now being a thing that exists. I also need to take time out from mass production and speed-blasting through stuff from time to time to work on individual figures with details and freehand, for the soul of it all.

This post, aside from reading a bit like a teenage girl’s diary or a man in midlife crisis (neither of which is totally accurate :p), is mostly a chance to show off a bunch of stuff I’ve gotten done this year. Nothing amazing or outstanding. Inconsequential things really. Much of it is scenery, and in the scheme of it all, none of it is really important. But it’s a bunch of stuff that got done, and in that, it’s good enough. The plan is to photograph everything that I finish this year, and eventually to photograph everything that’s painted in my collection. That last part might take some time.

These guys are some Dryads that I was either given or sold quite cheap by a friend back in the mid-90s. I’m not sure why I wanted them, so they must have been cheap or free. I think they may actually be recasts, given how malformed some of them are. Anyway, I found them in the bottom of a box of figures recently, and since I was able to finish the Bones Ent/Spirit of the Forest in a day recently, I thought I’d try and knock these up quickly as well in a similar manner. While they’re no works of art up close, they’ll look fine from across the table in KoW or in a game of Pathfinder, etc. A good example of “good enough”!

The Quonset huts I previewed a few posts ago when I cracked open some of the DUST Tactice expansion boxes. These painted up pretty quickly. I went with a worn desert scheme since my main mat is a desert mat. It also seems to be the most appropriate colour for moderns, and of course works just fine for WWII and 40k. I need to buy another couple of packs of these – they’re pretty great as well as inexpensive.

Dark Angel Marine charges out of the Quonset Hut doorway.

I also took a couple of pics featuring a GW Space Marine, since they’re so ubiquitous that they’re very useful for establishing scale for this sort of thing. I’m sure the Dark Angels have some fights around these huts in their future!

Here we have four statues made from random miniatures, some short resin columns that were no doubt in a bargain bin, and some plaques made from card. These were all originally made about 8-10 or so years ago. The writing is all painted freehand, and comes from an English-Greek dictionary, and an English-Russian dictionary. Naturally, I can’t recall what they actually say so many years later. This year’s work on them has been to “dirty them up” as they were way too clean – hence the dirt and wear on the stone, and the verdigris on the statues – which was my first play with the new Citadel Technical Paint “Nihilakh Oxide”. Verdict: It’s okay.

These barrels were started years and years ago. When? Who can remember. The important thing is that they’re finished now. I had a bit of fun (back when I started them) freehanding the cans on the two smaller sets. I’ve included the second pic with the Chronopia figures for scale – the barrels are a good size for both roleplaying as well as various types of wargaming. Sadly, I found several more of them in a box this evening. So.. more to come, more to go. After a bit of Internet Detective work, (and using my memory) I found the barrels, which are still available, over at Scotia Grendel Miniatures.

Power Pylon things from the 4th Edition 40k starter set: Battle for Macragge. I just added the tufts to these this year, and that’s too little for me to count them as part of this year’s tally (they were only finished last year). They were sitting next to a bunch of the other stuff I grabbed to photograph tonight, so they got a pic taken as well, since they fit the theme of this post, and as stated, I want to eventually photograph and post everything.

More random resin stuff from my dark past. Dungeon scenery stuff this time, along with two trapdoors from the GW Lord of the Rings Mines of Moria boxed set. The usual drybrushing and so forth, of course, but with the addition of oil-based MIG rust washes added. An example of wanting to knock stuff over but also using simple, inconsequential  things as an opportunity to play with new materials and techniques. – Like the statues above and Nihilakh Oxide. And I’ve just found them. The Grills pack from Grendel – though my pack  back in the day only came with three, not the six they now come with. The last piece of that set is on my “stuff that’s been started and put aside” shelf right now.

Once again, more resin randomness from my past. At one point, back when I started these in the noughties – I planned to base them on and make a single large scenery piece of a graveyard that I could plonk down on a table. At some point back then after startting the large base I changed my mind and decided to leave these as standalone pieces, which I think was and remains a better idea. Much more flexible this way, and I can still make an actual graveyard piece if I want to use the various tombstones that have been part of various GW (and others’) skeleton kits over the years. While these are more fantasy themed, but these could also work well for WWII or Zombiepocalypse gaming quite easily. And yep, it turns out that the graveyard set is also a Grendel Set. I suspect that a huge percentage of my resin scenery will turn out to be these kits. I bought a hell of a lot of them back in the day.

One of the real highlights of my Secret Weapon Miniatures Bag(s) ‘o’ Crap that I picked up in December – along with the Hesco and Jersey barriers shown previously was this overturned Half-track Ute (or truck) from the Secret Weapon Miniatures Scrap Yard Barricades set. I had quite a lot of fun painting this, with layers of washes and drybrushing and mediums and edging and applying effects with foam and so forth. Obviously this thing works best for Sci-Fi/40k/GorkaMorka/Post-apocalyptic stuff, but if you squint, it could also work for moderns in Afghanistan or the like.

Another nice surprise in my Bag(s) ‘o’ Crap was this turret. Part of the Secret Weapon Miniatures Scrap Yard Destroyed Tank set. A pretty nice piece, though Holy 3-d print lines, Batman! Still, for the price I paid for it, and even full RRP ($20 for a whole tank) it’s pretty nifty. It’s just occurred to me that I should have taken a scale shot with that Dark Angel next to the Truck and this Turret, but rest assured that both are well taller than The Emporer’s Finest, and I’ll take a couple of scale shots as an append to one of my next blog posts. Again, with a little squinting, this thing will work well in games set in any year from 1940-41,000.

And that, my friends, is that.

A not insubstantial update, but as I noted at the start, made of many of the sort of things that hardly justify an update in their own right. I’m up to 81 miniatures finished so far this year on Day 60. I’m ahead of schedule, though only because my criteria is so loose. Still, shit’s getting done. Which can only be a good thing. I hope to soon finish a few of the things blocking me from a couple of “fun” figures that I’m really looking forward to.