Some more painted figures from the LatD Army-oriented models.

I’m still pretty proud of this figure, another from the WarZone 1st Edition line – he’s a “Dark Legion Heretic“. I’m not especially a fan of Iron Maiden, but with that face, could he actually be Eddie in miniature form? I clearly thought so! Replicating their well-known font on a tiny miniature t-shirt was always going to be a bit much, so I went for more of a “Heavy Metal”-friendly font. 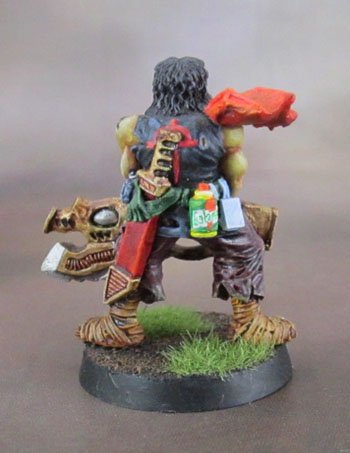 He’s painted with Dark Legion iconography rather than Nurgle or Chaos, but the DL is pretty much Chaos with a different name. The interesting/fun part of this model is the Gatorade bottle I gave him. 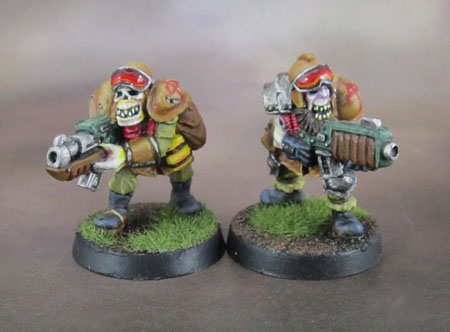 These two are (I think) Necromutants. I can’t find them on the Prince August site, and I suspect that these two might even predate WarZone 1e and actually be Mutant Chronicles models. Clearly these two were sculpted by Kev Adams as their faces both have his trademark style. From their faces, they look almost like they used to be an Ork and Squat, now fighting side by side in undeath. Which suits Nurgle just fine. 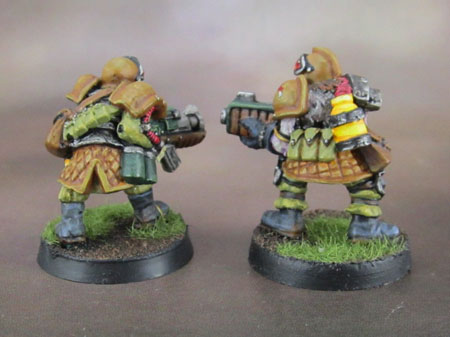 Even looking at their gear and posture, I find them to be very reminiscent of early Rogue Trader Orks and Squats, right down to their quilted armour. I’ve really got to dig out and (re)paint my RT-era Boyz sometime…

This guy is an Undead Legionnaire. They usually come in sets of four models, but apparently I only have the one painted. While the Blessed Legionnaires are much more generic zombies, the models of the Undead ones are designed with the look and uniforms of the WarZone corporations. This guy is a former Cybertronic trooper. I believe I have some more of these – but – down the track!

Sharing is caring – want some sausages?

These two pics aren’t that great. I may have accidentally turned off the Macro function, according to Marouda – and the Zombie is pretty washed out. I built this guy using Citadel Catachan models combined with their Plastic Zombies and a bit of putty. I built it for use with the first edition of Frag! as I recall. He’s also got a welcome place with Papa Nurgle’s band of misfit models.

Another group shot of all of today’s figures, sans the Zombie Horde part… 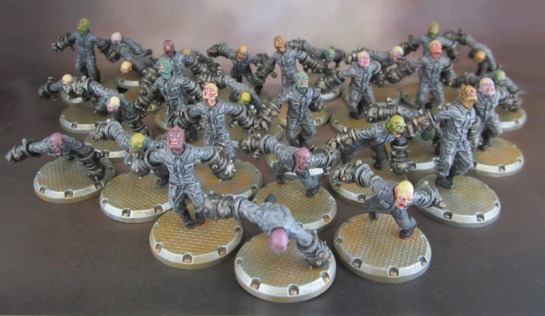 DUST Zombies, ready to be Poxwalkers.

Much like the DL Blessed Legionnaires in the last post, I’ve shown these DUST Zombies before but took the opportunity to take a new photo of them, as Nurgle Plague Zombies were always one of the things I had in mind when I painted them originally early last year.