Like most people who backed the Kickstarter, I got my Mantic’s Dungeon Saga stuff a little while ago. While the models are (almost all) quite nicely sculpted, there’s some terribad warpage on many of them. Combined with the usual Mantic Kickstarter-quality packing (I’m still waiting on replacements for a bunch of broken and missing stuff), messed-up hardcover compendium and reviews that talk about how Jake Thornton clearly lost interest as he was writing co-op and campaign rules (apparently you can see his interest wane as you read through the Adventurer’s guide as he was really only interested in the HeroQuest-level rules) means the game’s extras got placed in a plastic tub and the game itself stacked on top to get back to one day (or not). Whatever. I’ve got Black Plague to scratch my boardgaming itch for the time being without any resentful rules being mixed in. 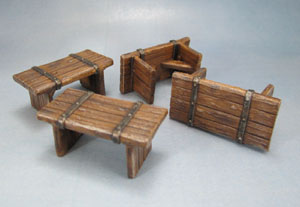 The scenery items for Dungeon Saga on the other hand, are pretty damned good. The doors are made from a proper, hard plastic (ABS or HIPS, most likely) while the bookshelves, wells, barrels, and so forth are made from a softer PVC-type plastic. Both sets are actually pretty damned good – especially for stuff that comes in a boardgame – and I’ve got no hesitation in recommending them to anyone who is a wargamer. They obviously wouldn’t work so well in super-detailed dioramas, but that’s a separate category.

So I decided to start painting up a few of these pieces. Now, a word of warning. I purchased several cans of Rust-O-Leum sparay paint awhile back, since the cans read that they were a primer and colour spray in one, and that they have some kind of special formulation that binds to plastic. Great! I sprayed a bunch of my PVC scenery with it, and the stuff simply never properly dried. Even after more than a week of Melbourne’s Summer Heat. This made my “quickly knock up some scenery quickly” task a lot more painful than I’d planned. The brown eventually mostly dried, but the black was still sticky and horrible, and so I threw them into some Simple Green a few days ago. I’ll get back to those, later. The point here being – DO NOT USE Rustoleum spray paint on miniatures. At least the formulation that they sell here in Australia. Never had a problem with other brands, and so I’m back to those. On reflection, though – it seems similar to problems that people have had with Reaper’s Bones PVC, so maybe it’s not the spray after all. I’ll have to do some tests on HIPS sprue and some resin offcuts….

As I have three wells in hand due to buying two of the sets + extras (I’m missing more scenery, too), I had an idea as I was taking them outside to undercoat. My first thought was to paint them all “dungeon grey”/bluestone but then as I was getting out the spray primer (damn Rustoleum) I had the thought to paint them differently. One to go with my desert mat, one to go with my green mat and one to go with the dungeon internals. So this one is sandstone. 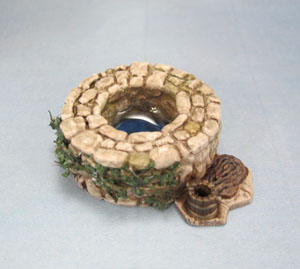 I added a bit of Vallejo realistic water at the bottom of each to make them look a little nicer than just leaving the shallow sculpted bottom (which, again is quite decent for a sculpted model.) I painted the second one here as field stone. I added a bit of variation between the stones, but that seems to have mostly disappeared after washes and highlighting. I finished it by adding some plant growth around the edges, and added a little more realistic water than the desert well. 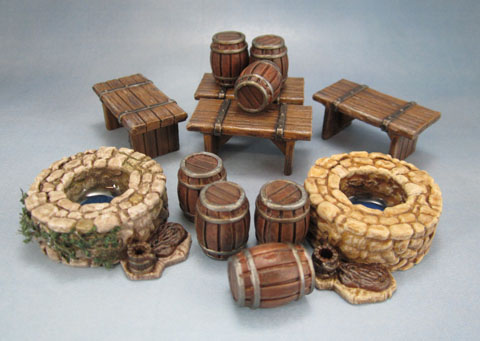 And here’s the “group shot”. I’ll have to get onto the bookshelves next, since I didn’t spray those and therefore gunk them up at all. Sometime after that I’ll have to try and scrub that horrid Rustoleum off the other pieces. I’m not looking forward to that one bit.

As a very exciting separate bonus – here are the Barrels and Crates from Reaper’s Bones II line. I painted these last year and photographed them because I’m now trying to photograph everything I finish, but they weren’t exciting enough to even sneak into any updates until now. So here they are.