And so today I finally finished the second two dozen of these. The first batch had all but two wearing the bronze bell curiass – the other couple wearing a linothorax. I realised that with the limitations of the Warlord/Immortal kit there was no avoiding having a whole lot of the models simply wearing robes and a helmet. So this lot are in essence the “secondary” group of Spartans to the first. Like the first batch, these are a little anachronistic in terms of their gear, but nomoreso than most media depictions and they look decent, so I’m fine with it.

24 Spartans lined up in a Phalanx for Skirmish-style gaming

As such, I went for a shield scheme that would be distinctive from the previous set, to mark them out as a separate unit. Black Lambdas on a bronze field, rimmed with red was a simple scheme to apply that also looks striking and effective.

Details of the linothorax and robes.

Being a mass of historical figures that will be far in excess of my “proper” Fantasy armies – and also made of figures on the low end of the detail scale, being both “historical truescale 28mm” and frankly not that detailed anyway (their feet are just undetailed hams with a hint of toes at best) I gave them as simple a tabletop job as I can stand to. I still couldn’t help going and lining the clothing of every one of them with a bit of white pattern, though. You can really only see some it from the side or behind, though.

One Horde or Two Regiments.

They’ll be predominantly used for Kings of War at this point, and so the 24 models make up either two regiments – or more likely a horde – of Spear Phalanx. Marouda helped sporadically, but didn’t enjoy the experience, so I ended up doing much more on them than I’d planned to.

Onwards! And so forth.

I did a simple conversion to mark out the leader. Not that it matters for KoW, but I like to take the opportunity to add a little bit of character in this way. I gave him his spear to hold in his shield hand so that he could wave his sword in the air, no doubt while delivering a stirring speech or battle cry to his men. If many years of warhams have taught me anything, it’s that leaders must be shouting, not wearing a helmet, pointing, or waving something around in the air. It’s simply the rules. 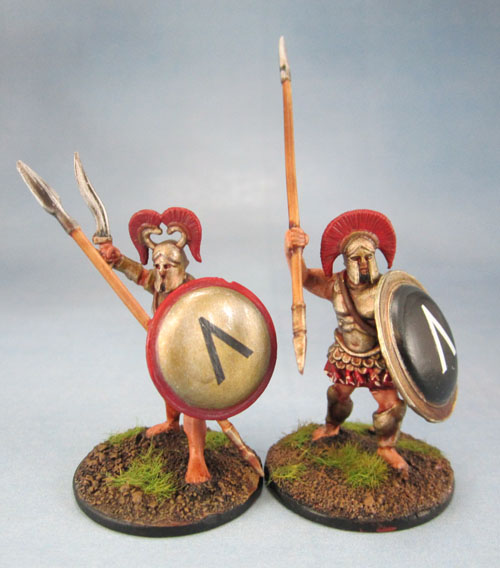 And alongside his little mate from the first unit.