The models in this post would ordinarily have been spread out over three posts – both because I post significant models as I get them finished – and these three were completed over several weeks in May – as opposed to within days of one another – and to give these models each their own room to “breathe” in posting terms. Since I’m WAY behind in my posts, and these three models all come from the same boxed set, I’ve got all three posted together. Originally started due to the Monster MAYhem challenge, these three are another set of models that missed the end date of that particular challenge, though I’m still happy that it was the impetus for actually acting on the “I’d really like to paint those sometime” thoughts I’d have whenever looking through game boxes and going past the Zombie Bosses set… 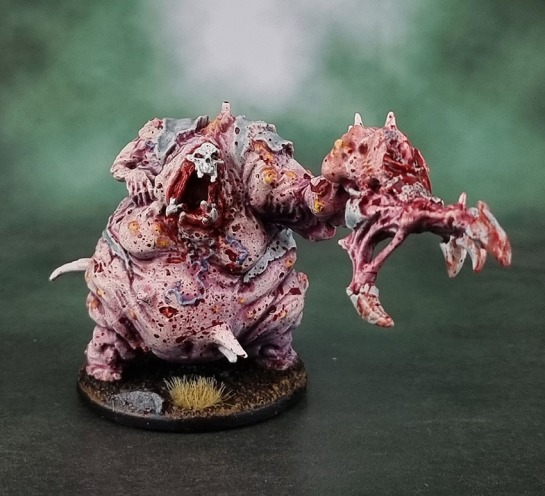 First up we have the Ablobination. Now usually, I’d tend to paint something like this in the same way I tend to paint my larger Nurgle Warhammer Daemons – in this case I originally thought to paint it in the same kind if distinctly browny-green manner. But then – I thought about it to myself. 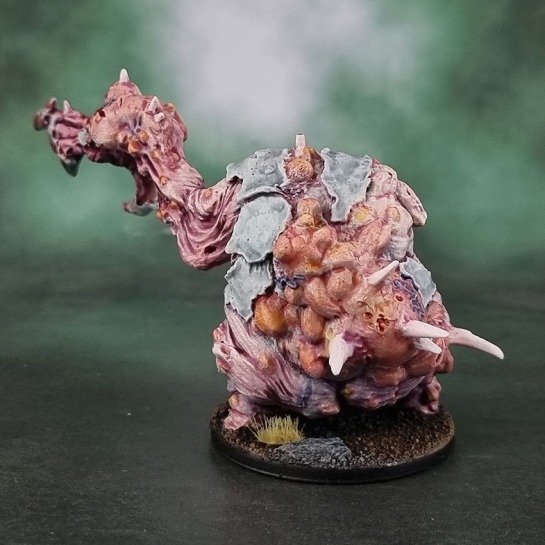 While I might use this model with my Nurgle Dameon force, the figure is actually of a Zombicide monster, and the “official” colour scheme of sickly pale-pink flesh does look pretty good, matches the card art, and would still work prefectly well if dropped onto a Warhammer table.

Next up, we have the Abominatroll. Again, rather than go with a Warhammer or D&D-inspired scheme, I used the box art as my inspiration. I figured that a desaturated blue-grey could look pretty good, and also work approriately for a Troll zombie.

Of course, he’s still covered in boils and pustules and growths, so I still gave them the usual red-yellow-ivory look to make them stand out from the rest of the greyed flesh.

As you can see, I also added little sub-tones to areas of the model, particularly with a touch of purple, but there’s also some red and other little bits of colour in there to prevent the model from looking too much like a piece of black and white art covered in blood spatter.

The blood spatter was also a bit of a challenge. Trying to strike a balance between an appropriate amount of gore for an unhinged, berserk, predator without just painting the hands and claws red. In the end, some of the bristles of the toothbrush I was using for the spatter-flicking ended up being perfect for streaking some blood across the claws. I think they worked far better than a fine brush would have, given the thickness of the gel BFTBG paint.

Finally of this trio, we have the Abominotaur. This model’s sculpt has some really deep detail, and so the deep styrations and gouges in the skin, when combined with the blood spatter, creates a lot of visual noise on the model in these photographs. 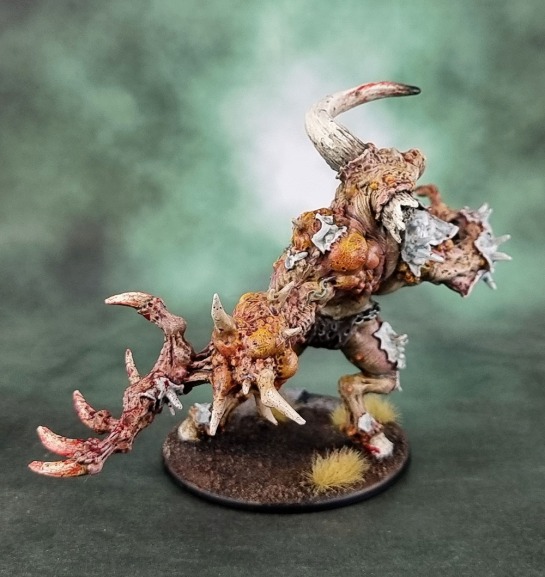 Even though the model is severely unbalanced by that huge and grotesquely distorted right arm and that pose, leaning so far back, it still manages to work pretty well, especially in hand.

At this point, I think most of these bony/spiky “armour” protuberences on my Zombicide models will be done in this kind of pale grey/off-white, with the exceptions of any models that need to be identified by a distinctive colour, such as the Bersekers.

I felt I had to go pretty severe with the blood on this one. Not only do both arms and claws look to be very …uhh …involved and so helped by a certain amount of blood – as well as the body spatter that would also come about as a result – and then that vicious gaping maw. 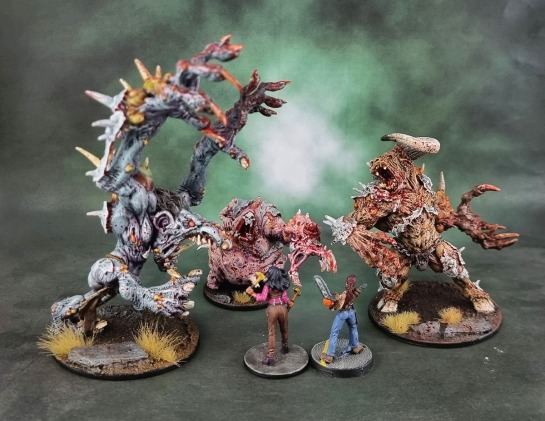 Finally, a shot to show the scale of these models – yeah, they’re pretty bloody big. I noted in my previous post that Ann’s most recent painting challenge was the Summer Solstice Painting Challenge, and that I was torn between four different models painted in that time period for my own favourite – two of whom being two of the five Black Templars just posted and also two others – those two other models are the Abominatroll and the Abominotaur. I really don’t have a solid favourite from the four, since there’s two pairs of two, and there’s a huge stylistic difference between both pairs that makes it hard to choose. Your call, Ann! 🙂