Well, as I’m sure those of you who are regular readers of this blog will have noticed, I haven’t posted in awhile – so here’s the small backlog of the last few models I finished back in May before the round-up and then onto the stuff I painted in June. A couple of the big reasons for the long delay have been the fact that my usual photography area has been a mess as I’ve overhauled part of the War Room with a long and painful combo clean-up, clean-out with some new storage, display and hobbytech stuff being added. On top of that, wanting to actually sit down and properly play some video games (played through Sniper Ghost Warrior 3 entirely, finally finished Agents of Mayhem and have been playing Watchdogs: Legion, Minecraft Dungeons and restarted The Division 2 in 4k/60). Oh, and not really wanting to be arsed (re)taking the photos for this post and needing a little rest from the old blogging. 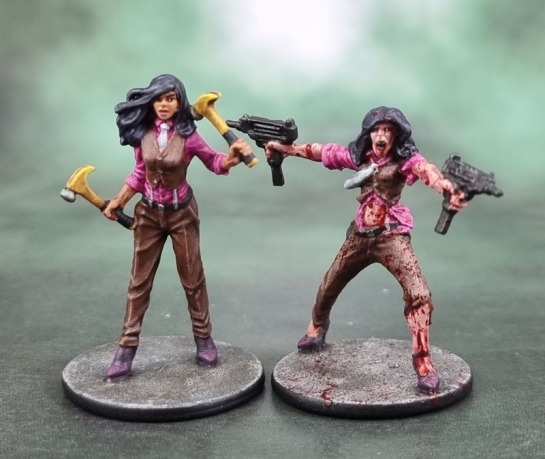 All three of the Zombicide survivors in this one are original characters from the game, rather than the endless stream of “homage” characters I’ve been working my way through. First up we have “Kim” who I’ve painted in much the same way that she’s depicted on the card art, though she always struck me as looking like a woman of South Asian descent for some reason – so I painted her as such. Kinda hard to tell of any other ethnicity besides “white”, black” or “brown” when painting teeny-tiny models, but I’ve been assured by people who have been to what I understand is called “outside” that others do exist, and so this is my attempt there. 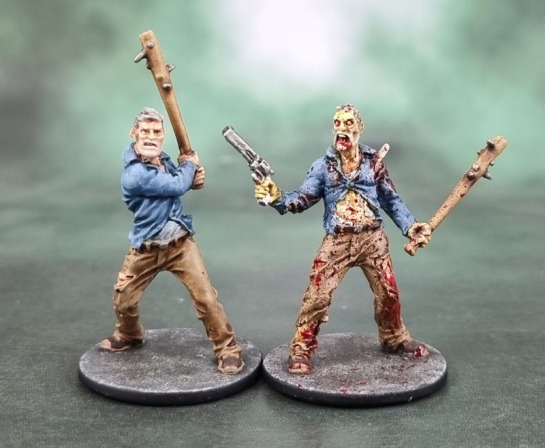 Speaking of “white”, the model of “Watts” really strongly spoke to me as “angry middle-aged suburban white guy”, so while I kept to the card art’s clothing choices – which also fit that stereotype pretty well – I aged him up a little with greying hair. Now get off his fucking lawn. 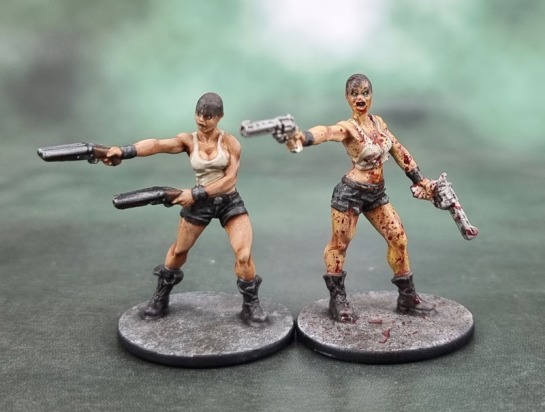 Finally, “Shannon”. Now while I am well aware that parts of the Zombicide online community really like to figure out and assign what they think must be deliberate CMoN/Guillotine Games homages to even the original characters, (Some thought this charatcre must be Ellen Ripley because she’s Bald in Alien 3.) – I’m well aware that sometimes A Horse is Just a Horse. With that in mind, and the fact that a certain movie involving a Road and some Fury was released quite a few years after this character, I still decided to paint it up as a little homage of my own to Imperator Furiosa. And yeah, I’ll have to get that Hasslefree model sometime. In fact, I thought their recent 1-week sale was a 2-week sale, so I’ve just missed out and will have to get onto them next time they have one as there’s quite a few models I want to pick up… 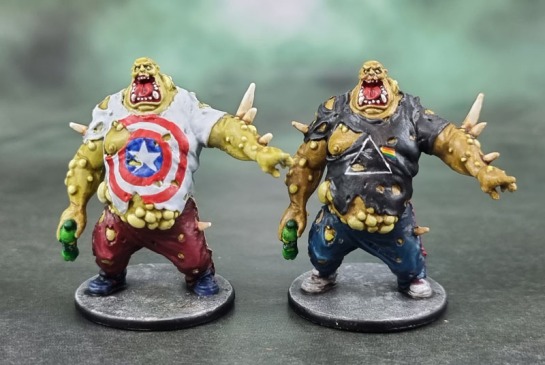 Now for the exciting bonus content. Here’s my first pair of Toxic Fatties (try posting that phrase on Twitter and see what happens!) Since these Fatties wear civilian clothing – unlike the prison-jumpsuited crustaceans that are the Berserker Fatties – I decided to give them clothing that… we’ll say clothing that fits in with people of this stature. I’ll continue to do so with the rest of these (and the regular Fatties, eventually) and hopefully cause a ton of offense to people who can’t take a joke. While finishing them I noticed that I hadn’t blood-spattered the Toxic Abominations, so I left the blood spatter off this pair as well. I can always come back and add it later, of course… 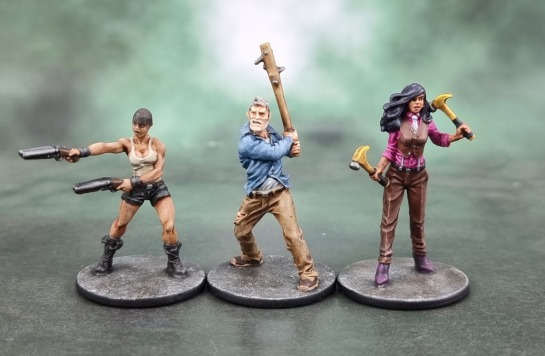 Also, group shot of the three survivors, ready to be used for any appropriate modern-to-post-apoc or even the low end of a sci-fi game. Hell, I could use them for Frateris Militia if it came to it! (Are Frateris Militia even still a thing?) 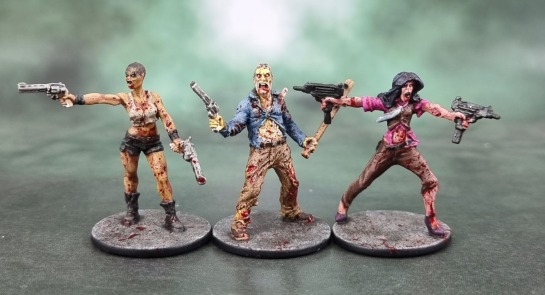 And finally – Zombivor models. Ready to be used for …zombies? I guess.