In my formative Warhammer years, there was a bloke called Dave. Dave was in his (I think) late 20’s when I was a late teen, but we were both in the same Warhammer circles, and he was definitely a good bloke. He commission painted for some people and had a huge collection of models. He used to put together some amazing looking conversions and kitbashes back in the days before plastic kits became the norm. I’ve got a few of his conversions in my own collection, as well as some that I used as the base for further conversions of my own.

I lost contact with Dave over the years, as these things happen. But I recently found a Khorne Chaos Dreadnought conversion that he gave me to paint back in the day. Well, it used to be called a Chaos Dreadnought, but now we’d call it either a Chaos Helbrute or a Ferrum Infernus Chaos Dreadnought.

As I thought it looked bloody amazing, especially in relation to the godawful 2nd Edition Chaos Dread, my payment was to be another Dread of the same type. I found the model again this weekend, and sat down to finish off the final bits of detail that were left to do. Given the amount of time that’s passed, I’m not expecting anything in terms of payment, but I’ll be happy enough just to get it into Dave’s hands.

So here it is. Well, most of it. He never gave me the weapon arm. I think he was working on something unique before passing it onto me. Also missing the Hellfire Missile rack, which was converted from a non-Citadel model. I’m sure I’ll find it, then finish and post it out.

I’ve got an old phone number that belonged to Dave years ago. I called it yesterday evening and got an answering machine. I’ll call it again today and hope to get through. After that, I know of some clubs he used t frequent on the other side of town so I’ll see if I can track him down that way. 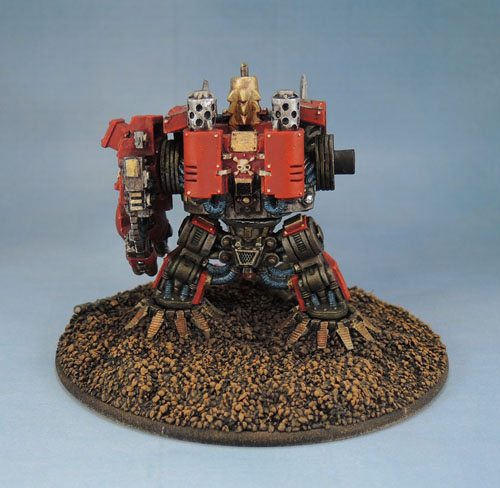 The base is an MDF drink coaster. A little big in my opinion, but it’s Dave’s model and if that’s what he built and he’s happy with it, more power to him. The model is based around a stock-standard metal Castra Ferrum Dreadnought – AKA 40k 2nd Edition/Angry Washing Machine. Feet are Epic 40k Drop pod bases of some description. 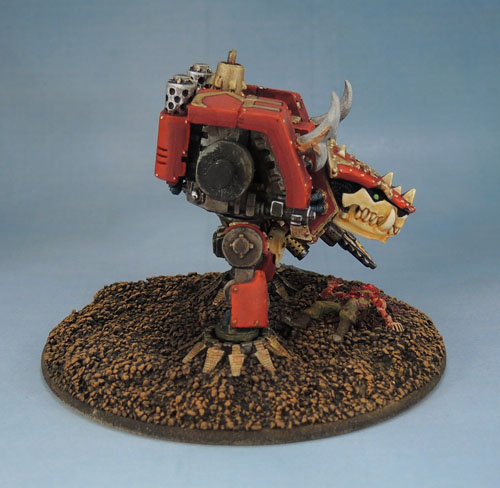 The head is from the 2nd Edition-era Juggernaught of Khorne grafted onto the front of the Dreadnought Sarcophagus. The spikes come from the Chaos Dwarf Boar Centaur Warmachines – Tenderiser or Whirlwind. The Close Combat arm is made from a standard Dread CC arm with a plastic Adeptus Titanicus Warlord Titan chainfist replacing the power fist’s “hand” and a converted melta barrel replacing the storm bolter barrels. 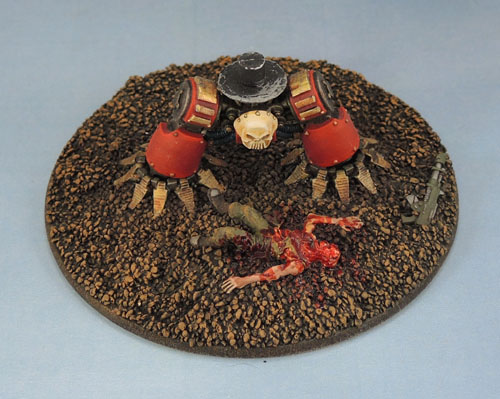 The skull-codpiece is an old metal chaos shoulder pad, the Imperial Guardman’s corpse is an Aliens Colonial Marine casualty from some long lost range, and the lasgun is from the Necromunda Accessories sprue. Dave can add flock, static grass or tufts or any other foliage, to taste once he gets the model in hand. The three parts of the model are only sitting together in the above photos, rather than glued – with the torso loose and the arm blu-taced to the body. Once he gets it, Dave will be able to pose it however he likes, or even attempt to magnetise the arm and sockets.

It’s a pretty cool design in a lot of ways, and moreso considering that it’s entirely made of metal components. It weighs an absolute ton! One day I might try to build one of my own – inspired by this one, but using plastic components…