Here’s the completed squad. I managed to get outside today to retake the blurry photos, so here we go: 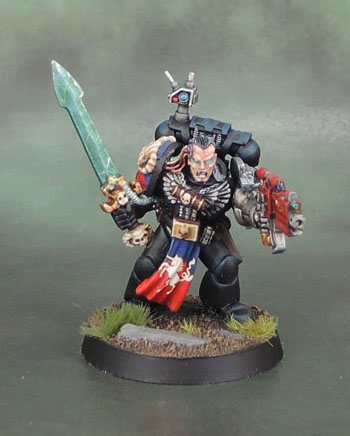 This is Librarian Edinorog. He originally hails from the “Monokera Rampant” chapter of Space Marines (both names subject to change). He took fucking forever to paint, because he’s so covered in so much fiddly bling. I painted his eyes in white, and used Nihlakh Oxide to give them that glowing “caster about to do something psychic” look.

Again, the figure used here is an old one. A Librarian model “Lexicanium 1” from 1995/6, he’s another model who had had a long journey in getting started (around 2006) and another decade on top to be complete (end 2017). Though these days a Librarian would not be a leader (or member) of the squad, so I’ll have to build and paint another Deathwatch Veteran to make this little group legal. Or another six.

The sword was painted with the bluish teal shade I’ve been using for power swords, but I was unsatisfied with it. I tried to fix it by subtle criss-crossing it with thin lines of silver, but then it just looked messy. So I added a thinned down coat of Transparent Green from Warcolours to try and give it a different look that still fit a power sword. It turned out darker than I’d wanted, but I still think it turned out quite decent.

Once again, the Deathwatch parts added to the model are the metal shoulder pad and bolter from the original metal add-on bits, along with a current Deathwatch backpack. On this and the other models in the squad, I’ve attempted to very subtly shade the shoulder with a touch of blur, and the arm with a touch of brown. You probably didn’t notice that on any of these models before I mentioned it, but you have now. So job done, I guess. 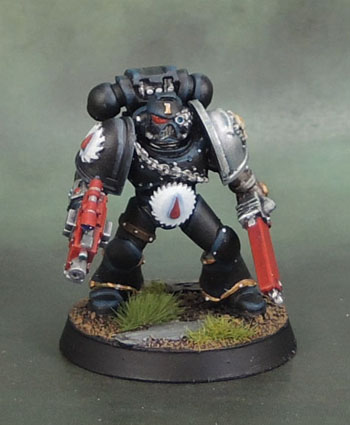 Here’s another one of the models that started blurry. This model was originally going to be a Crimson Fist, and actually had the Fist icon attached to his gut-plate, but I decided that his armour was a little too feral looking for a Fist, and pried it off, replacing it with a Flesh Tearer icon. The chest and legs both come from the old Khorne Berserker kit and the head comes from the metal Deathwatch parts from the mid-noughties.

I somehow lost the original right arm, and the pad was to be a metal Fists one, so I simply used both parts from the modern kits. All the parts fit in well enough with one another, so it works for me. I also hazard-striped the cable since painting it metallic or dark grey would have been too boring, and dark red is already the weapon colour.

The chainsword arm is just standard 3rd ed parts while the shoulder pad is taken (I think!) from the Marine Command Squad sprue. It’s a good example of the way that GW’s plastic technology has moved forward in the past decade, moving from smooth sides here to the sculpted script in the current ones. 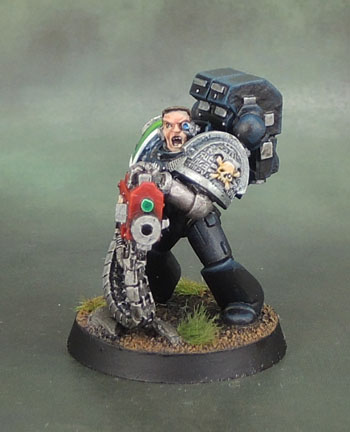 Last of all, we have this dude with a heavy bolter. Once again, the weapon is a reflection of the original rules and available models of the day – both arms, the weapon and the backpack are metal while the megs and torso are plastic. Yep, he’s from the days of plastic-metal hybrid kits! The shouty head is the metal one from the old Deathwatch sprue of the day, and obviously the Deathwatch shoulder pad again comes from that conversion set. I think I actually had to use clippers to cut the original right ahoulder pad off so I could mount that Deathwatch pad onto it. Fun!

Despite being such pain in the arse to assemble (I had to do that as part of the recent work, as he’d almost completely fallen apart over the years), he’s come together quite nicely. Even if his weapon isn’t a blinged-out combi-weapon of the modern type.

The shoulder pad had a feline head icon from Shapeways added to it. I do like the effect of sculpted detail of this type on my marine models. Steel Panthers sound ok for a Chapter name? Good. Done. And now that I see this pic, I notice that I forgot to paint a name onto his scroll. I’ll have to bring him back inside and sort that out. Tomorrow. I think I also missed the lights on his backpack as well. And huh. Look at that. Red cable. Ah well.

Finally, the reverse shot. I’m out of interesting things to say about this model. So let’s just admire the work that his powered armour needs to to to carry all that crap around!

While the squad might not be table-legal for the current edition of 40k, I’m still quite satisfied to have taken another group of marines out of that old case and actually finished them off. With only a single marine to sort out to make them legal, I’ll hopefully be able to work around Painting Decembuary to get one done by the end of January. Any more will have to wait until a bunch of other stuff is completed and out of the way, I’m afraid!