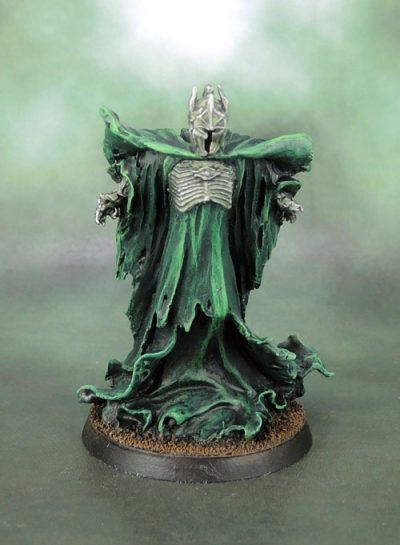 Like The Tainted and the other “Named” Nazgûl that Games Workshop created in the post-RotK space, this model of Sauron is aesthetically based on the look of the characters and villains from Peter Jackson’s LotR films as well as the snippets of information gleaned from The Hobbit.

As such, this figure was designed and released many years before The Hobbit Trilogy of films was fully conceived, so Games Workshop went with a mode spectral and – in a sense – Warhammer type of design for Sauron as opposed to the “skinny pupil” design that the films went in the end, which was much more reminiscent of the Last Alliance appearance of Sauron taken from the Beginning of The Fellowship of the Ring film. 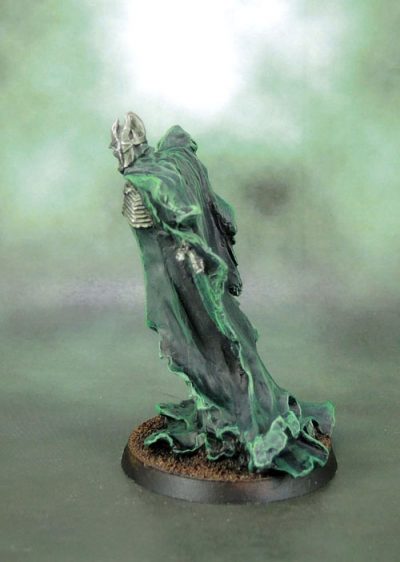 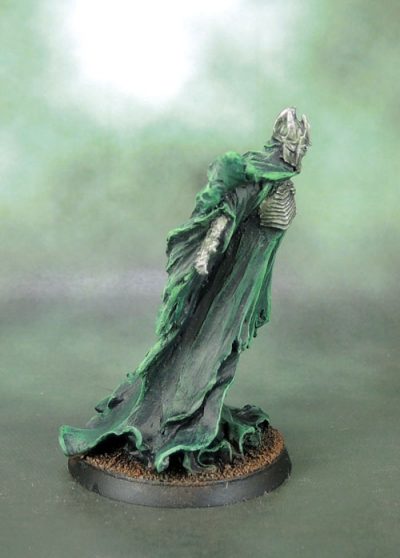 I could certainly see using this model in a Nighthaunt army alongside the new Age of Sigmar stuff, as the “ghostly” design aesthetic is still actually pretty close between this model from the early 2000s and today’s newest 2018 releases. Some of the paint here is a little bit rough – I used drybrushing for the first couple of layers before blending the later ones. It just wasn’t going to be a model where the amount of that extra effort was going to especially pay off, at least in my opinion. As is often the case, though – larger photos serve to amplify less obvious flaws and rough spots.

Here’s this iteration of Sauron alongside his fellow speculative models. I do have another of this particular sculpt, so perhaps down the line I’ll paint the other in a black-to-red scheme. Lots of other stuff to get done before that’s an active consideration, though. So for now we have another July model done!