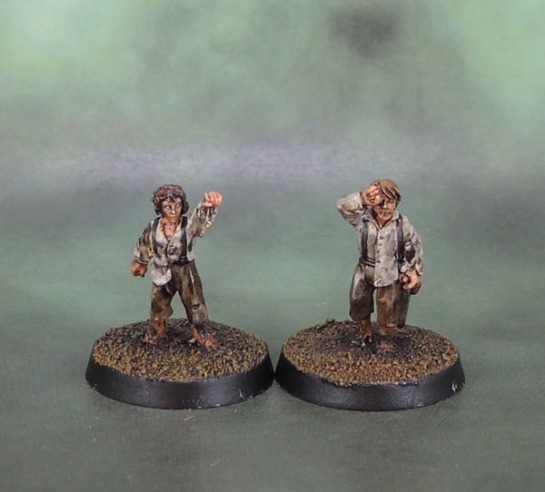 Today we have another duo for the Jewel of July Challenge – indeed – another pair of Lord of the Rings models. Frodo Baggins and Samwise Gamgee – with the particular sculpts that GW released for the final part of their quest to cast the ring into the Fires of Mount Doom. I’m.. not entirely sure why I bought these two. I think they may have been secondhand, where I’ve been much more likely to pick up models that I wouldn’t get at retail. I mean, they’re nice enough sculpts. They’re just very, very limited in their use beyond display models, even if you’re playing a LotR narrative campaign (which we will be doing soon). 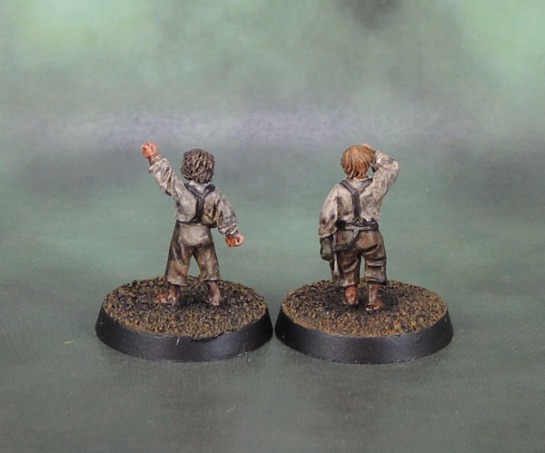 I painted the pair of them really grubby. Much more than GW’s example models, which are mucky yet a lot cleaner. Given Frodo’s pose here, we’re really talking about the point of the film where it reaches the climax of The Ring’s tale – the first of about five endings – and both hobbits are both filthy and sweaty and covered in muck on their clothes, faces and everywhere else by this point.

And so then, are these figures as well! In the photos they look a bit roughly washed, especially in some of the clothing folds – and they are, with washes, powders turned into muck, and more – though the satin spray I hit them with gives them a sweaty sheen – again, to represent their look when the ring is cast into the fires, and it does a lot to reduce the roughly-washed look. Also, the figures are bloody tiny!

Here’s a shot of them alongside the Ral Partha Giant Spider from the other day. It might have been a useful scale shot for the spider  …except it’s with LotR range Hobbit figures.

Still, GW’s Shelob model isn’t a lot bigger, so perhaps this may end up being a proxy once we get to playing through TTT/RotK? It could pass for a Child of Ungoliant in my book!