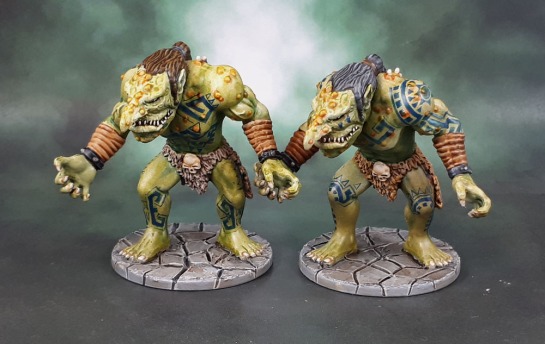 More D&D stuff today, and another example of Trash Models which, despite the uncharitable term that I use can very much be an opportunity for something positive in terms of painting. Once again, I’ve used these models to experiment on – and in this case, I think that they turned out pretty nicely. I should probably start by saying I’m no fan of these sculpts. The oversized Warhammer-goblin-esque heads just look silly to me, and the pony-tails don’t help, either. But since I needed to paint the fucking things, I wanted to make the process worthwhile, so it was going to have to involve some experimentation.

The models are mostly exposed skin, with just a couple of more detailed areas, those mainly being the head and the furry loincloths. Loincloths being simple things, I painted them very simply, and didn’t even bother with the multi-tones I usually do. Wasn’t even a conscious decision to skip them – I just forgot literally until now that I’m thinking about and describing the paint process. They’ve got a bit of musculature, but are overall pretty sparely-detailed figures, and even that musculature is pretty softly detailed.

So this left me with a bit of a quandry – how to paint such large expanses of skin without driving myself insane? So with that, I decided to try was a thinned down paint glaze over a stronger-than-usual zenithal spray prime. It worked okay, but it was also, frankly, boring. It doesn’t really show here, but the two trolls have slightly different skin tones as well. I added some additional shading with a darker thinned green and a few highlights in the usual manner, but you know what? Still boring.

So I left them for a week or two, then came back to them and just started doing vaguely South American-style patterns as tattoos on them. Aaaaand…. then I kept going, and going, and it turned out I was enjoying it, so I kept doing them back and forth across the two of them until I felt they were done. 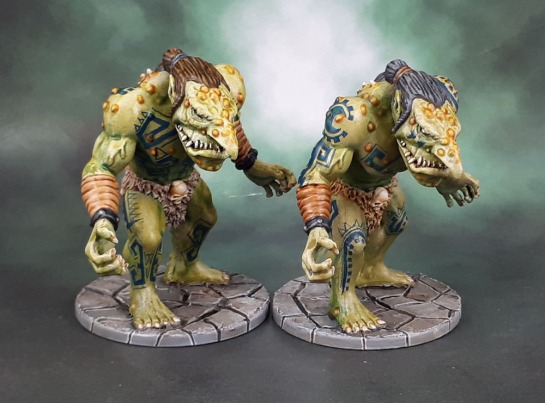 So in the end I’ve ended up with a pair of models that are still dodgy sculpts, but I’m able to have some fondness for. Also another pair of models done and ready to go when we start playing the Drizzt campaign as well. 🙂