These little fellas have been on the go since 2005. They were part of the Ork Combat Patrol force that I was working on when my brother passed away, which got boxed away until last year when I was ready to start working on them again – which almost all of these WAAAAGH! series posts are. I’m very happy to have finally finished them off over the past few days, which included rebasing all of them. These figures aren’t “proper” gretchin, in fact (as the post title has already told you) “Snotz” from GorkaMorka in 1999. Which means I started painting them only about 6 years after buying them, which for me is actually pretty good.

They’re based on little 20mm round bases. While rebasing them from their original GorkaMorka “football” grot bases, I did briefly try one out on a regular 25mm base, but it looked absolutely ridiculous, but fine on a 20mm base. I did have to order some more of them, as I only had a few from a Red Box Games order a couple of years ago. I’m sure they’re legal enough in the current version of 40k, as GW doesn’t seem too fussed about base size anymore.

I do recall when I showed the WIP versions of these models many years ago (must have been on DA-WAAGH forums) one guy told me that I had them on illegal bases, and then another guy chimed in stating that GW had said that any model could always be used on either the bases they came with, a larger base than that, or whatever the current base size was. Clearly a way to grandfather in things like the Rogue Trader-era terminators, or Abaddon the Despoiler, who originally came on a 25mm base. (I should really paint one of mine!)

Now one thing that’s hard to miss is just how bloody luminous they are. Something that was a part of older Orc/Ork fluff was that essentially, the bigger and tougher an Ork was, the darker their skin became. Obviously the pinnacle of this sort of thing were Warbosses in 40k, and Black Orcs in Fantasy. On the other end of this spectrum was that goblins/gretchin tended to be lighter and brighter, and obviously snotlings are even moreso. 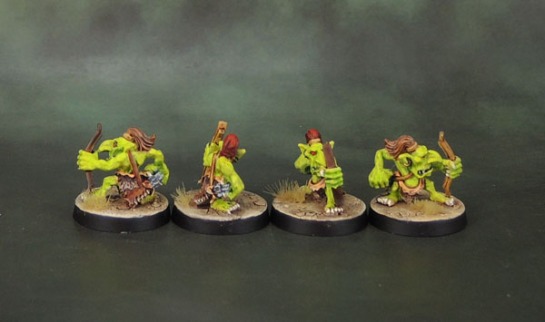 Why so many photos of the 4 sculpts x4? Because look at them! They’re snotlings! No-one is ever going to look at them as much as a few people online have just looked at them right here right now. Certainly not on the table when there’s other big and eye-catching stuff there, but at the same time there’s a lot of work here. This is their brief moment in the sun. At some point I’ll get onto the “proper” gretchin models that I have from Rogue Trader and 2nd Edition, as well as the tidy collection of GorkaKorka gretchin, vehicles and of course Da Red Gobbo.

In the meantime, here they are with their Runtherd, also from the GorkaMorka range. Having completed these models, I’m left with only one more figure from that original warband – the Warboss. He’s been on the painting table again for the last few days, so my hope is to finish him off in the next few days and then get him posted up here. varnishing him is going to be a problem with the current UK weather that has somehow made its way down here to Australia (actually, today’s downpour and cold comes from Antarctica). Wish me luck!