The last of the painted models from April to show off, these were once again some Shadows of Brimstone bits that I found and decided to quickly knock together in order to hit 30 models in the 30-day month of April. 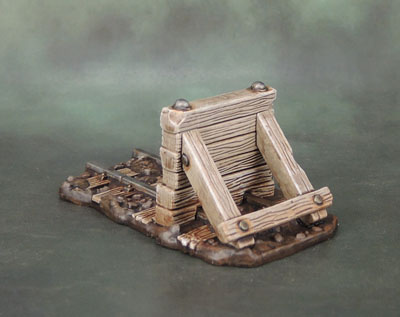 The quality in this kit is probably best described as variable. The buffer stop is rather excellent. Nice and chunky. The actual stoppers look a bit oversized, but fine. I painted the reinforcements and such as metal rather than wood mostly as an excuse to get some more colours onto it, and I’ve gone for a pale wood, not quite grey yet – to represent aged wood. I’d have added some grass, etc, but since I figure this is going to spend a lot of time deep in a mine when playing SoB, I’d keep it without any of that sort of thing.

The mine cart is more than a bit undersized. It barely fits on the tracks, and if you blow on it (or look at it funny) it will fly off. However, the boxes and barrels are a bit more egregious…

This is what was shown in the Kickstarter. So when the sprue arrived, the photo of painted minis above provides both of the “2x crates” and one of the barrels. (yeah, even though the render shows 2x double-crates). Want to see the other barrel? 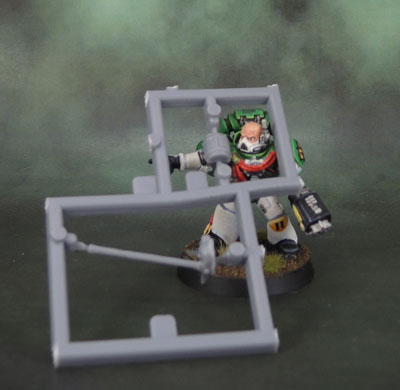 See that tiny thing that’s the size of the Space Marine’s head? Yeah, that’s the other barrel. So I’ve left it on the sprue so I don’t lose it, since it’s useless as a bit of scatter on it’s own, and will need to be glued to something larger to have any use at all. The other thing is a pickaxe, which wasn’t promised, but I guess takes the place of the other crate. I’m not exactly what you’d call upset – mostly because I have many other barrels and crates, but it’s a bit annoying and silly. They could surely have fit another of the crate piece or the barrel on the sprue in place of that stuff.

Anyway, on Monday night while I was working my way through this stuff, and the Pylons, and the dive-suit Harvesters, and the Auto-turrets, it quickly became apparent that I was not going to get he turrets finished before April ended. So I went searching for some simple resin terrain that I may not have painted. I found this pair of crate stacks, which I picked up in the 90’s from Grendel (now Scotia Grendel), and quickly knocked them up over an hour or so (mostly drying time) while working on the other stuff. In doing that, I hit 31 models for the month of April – which achieves my goal for at least one miniature for each day, every month in 2018.

Here’s the “Mine Terrain” set, along with the crates, and a Space Marine to provide scale reference.