Today we have yet another pair of Zombicide survivors – I figured that since I was on a roll of getting one of these characters painted each day I should most definitely ride that wave of paint enthusiasm as long as I could get it to last, especially as I was able to get models painted that I’d otherwise been avoiding. 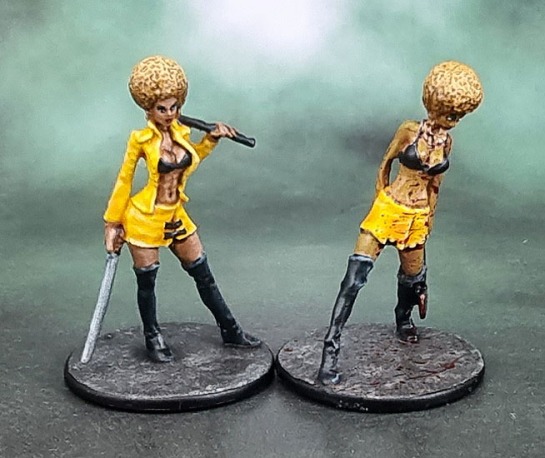 First up, I plucked out the model based on Beyonce Knowles’ performance in Austin Powers in Goldmember, a movie I still haven’t gotten around to watching. I really should, but such a backlog, and I spend most of my free time painting or sometimes vidya-gaming. As with Belle, I emphasised Beyonce’s abs after one of the images I found from Goldmember really showed the work she put in there (much more than in the below image of the outfit).

It did take a little bit of googling, but I eventually found the exact outfit in question. And boy I was chuffed to need to paint a bright yellow!

In the end, I was pretty happy with how well I was able to replicate that bright-as-fuck yellow from her movie outfit on the model.

Lea is a model based on Emma Stone’s “Wichita” character from Zombieland – which if you haven’t seen it – is quite a fun movie about a Zombie Apocalypse and one I do recommend catching if you have a chance. The second one’s not as good, but the first one is a real fun film. Guillotine Studios took a few extra liberties with Wichita’s design when they ripped it off for Zombicide and put Emma into a sexy nightclubbing version of her movie outfit, complete with barely-there skirt and whoops! It’s been ripped right off her arse so you can see her panties! in the Zombvivor version.

I mentioned when I showed off “Maki” the other day that the whole “bra-less” and “open shirt” Pin-Up thing doesn’t work for me with these models. I’m not going to use the term “problematic” because fuck people who love to throw that word around on the internet as though using it makes them better humans. That’s also not to say that I have an overwhelming problem with models that are skimily dressed, or even bare-chested – it all just depends on the context – for example, Witch Elves, or Ancient Greeks or Romans (or even some Norse figures). Or or even some of the skimpy outfits that many of the Zombicide “tribute” figures that specifically attempt to pay “Tribute” to specific characters or performers from Pop culture in specific outfits from specific movies or scenes.

I have to say I have a much bigger issue with “Lea” here than with “Adriana” because I don’t recall Emma Stone wearing a tiny skirt and crop top in Zombieland – that outfit involved a regular white t-shirt and jeans. I don’t even mind a bit of artistic licence taken to modify an outfit somewhat, but then when you just take an existing character and make them a sexy version of that character that’s not from the media (in your Zombie-killing game!) you’re basically headed somewhere else….

Like, I’m fine with this outfit in *some* situations, but it might not work best in a more “serious” cosplay.

I mean, I’m not going to pretend to speak for women or pretend that “women” are some sort of monolithic entity that all have the same opinion, but I am pretty comfortable speaking for myself. And in that, I’m ok with the outfit that Adriana wears (or “Cat”, who will be up shortly) since it’s taken directly from the movie, but I am annoyed with “Lea”. Not so annoyed that I wasn’t going to paint the model, or that we won’t use the model and character in our games, but annoyed enough to write this up and make unimpressed face (google it!)

Anyway, that’s all I need to say on that for now. Stay tuned for more exciting Zombicide Survivor models wearing skimpy outfits, and even a couple who aren’t (because they’re blokes!)