This week I was lucky enough to take delivery of several sets of resin conversion parts from a trio of Polish sculpting studios. Since I know I’m always keen to see “in hand” and decent quality pictures of these things (as opposed to the website pics which can be small or not so great or even “too perfect” 3D renders – and they usually can’t show you comparison pics with other manufacturers’ models, so I’ll do some of that as well.

First up is some stuff from Maxmini.

I have the Maxminis Pirate Orc heads. Just right for any group (crew?) of freebooting Orcs, Orks or even Orx that one may want to put together. I picked up both sets – the larger Nob-sized Pirate Orc Heads as well as the smaller Pirate Orc Boys Heads. 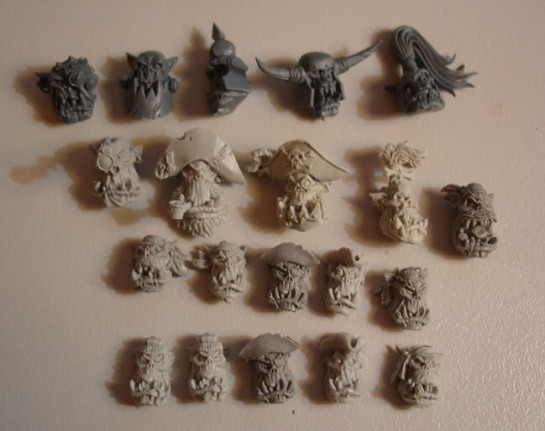 Brilliant sculpting. Easily on a par with or better than GW (better than their plastics, equal at least to their metals and I haven’t checked out finecast yet). The resin is good quality – not the kind that makes your hands itch after touching it, and as can clearly be seen by these pictures, there are no miscast parts, no bits of the mould stuck in the detail, and not even any bubbles in the resin. Cleanup would take about 40 seconds-1minute per head – just trimming any tiny pits of chin flash (not all of them have any) and flattening the base of the neck. Top quality!

I’ve also got some of their Steam Knight stuff I’ll put up shortly – probably tomorrow if I get time. That’s also extremely well done. I’ll definitely buy more of these guys’ Orc resin pieces in the future.