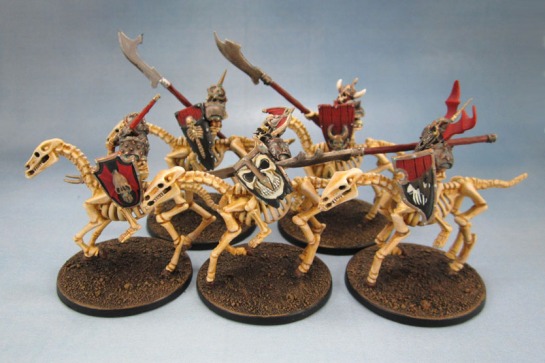 First up, I’m not the one who converted these – I picked them up on eBay from someone who was clearing out a lot of Warhammer stuff, and didn’t realise that they were conversions until much later when I was trying to work out what they were so I could sort out a standard bearer. The torsos, shield arms and heads appear to be from Grave Guard, the horses are the long-serving “Skeleton Army” horses and could have come from almost any kit of the last 25 years, which just leaves the Glaives/Lances and legs. Unarmoured Skeleton Legs could be off any number of kits, and I suspect that the glaives come from another current kit, though I’ve got no idea which one.

As is often the case, when I started painting these guys I had great progress for the first week or so, getting a lot of them done. Unfortunately, I then decided that I should build that standard for the unit to paint at the same time for consistency, at which point the entire project stalled out for 6 months. Last week it was their turn to be finished and gotten off the desk. I’ll sort out the standard bearer later.

They were originally mounted (and I was painting them) on standard 25x50mm GW cav bases, but partway through I decided to cut them off and stick them on 40mm rounds. Makes it easier to call them a larger unit in KoW, and also allows us to use them as (slightly over the top) Oathbreakers/Army of the Dead in LotR SBG.

The’re a little plainer than they should be, since I’m still waiting on my cans of matt varnish that I ordered 2 weeks ago. I called the place on Friday and it turned out that they never got ordered because the guy who took my order has been sick (for 2 weeks?) and the other guy didn’t know what the note was about, despite my name and phone number being on it. (Now that’s service!) So he ordered them on Friday and hopefully they’ll have them inside another week or so. Once the varnish is done, I can add some tufts and flock, which will distinguish them from their bases a lot more.

I stuck to the Undead Army Palette that we’re using for these guys – bone, black, red, bronze and steel, with subtle touches of blue-green verdigris where appropriate. As I said, they look a little plain to me right now, but getting some green onto their bases will help a lot.

This guy’s shield was a real headache for me. The metal spike-shaped brace going right down the middle made the black background incredibly plain looking and making it pretty much impossible to freehand something interesting onto the shield. I thought of halving the shield – red and black but it seemed a bit weak for the unit leader. I then decided to try and incorporate the spike into the design and freehanded a femur snapped in half by the spike but I was unhappy with it. Then inspiration struck, and decided to use it as a nose guard on a helm, with an undead face underneath. While the spike still looks a little big, this worked well enough that I’m happy with the final result.

I’ll show these guys off again later on. Once the standard bearer is built and painted (and they’re all flocked). Until then, these guys are done and can be used in games.